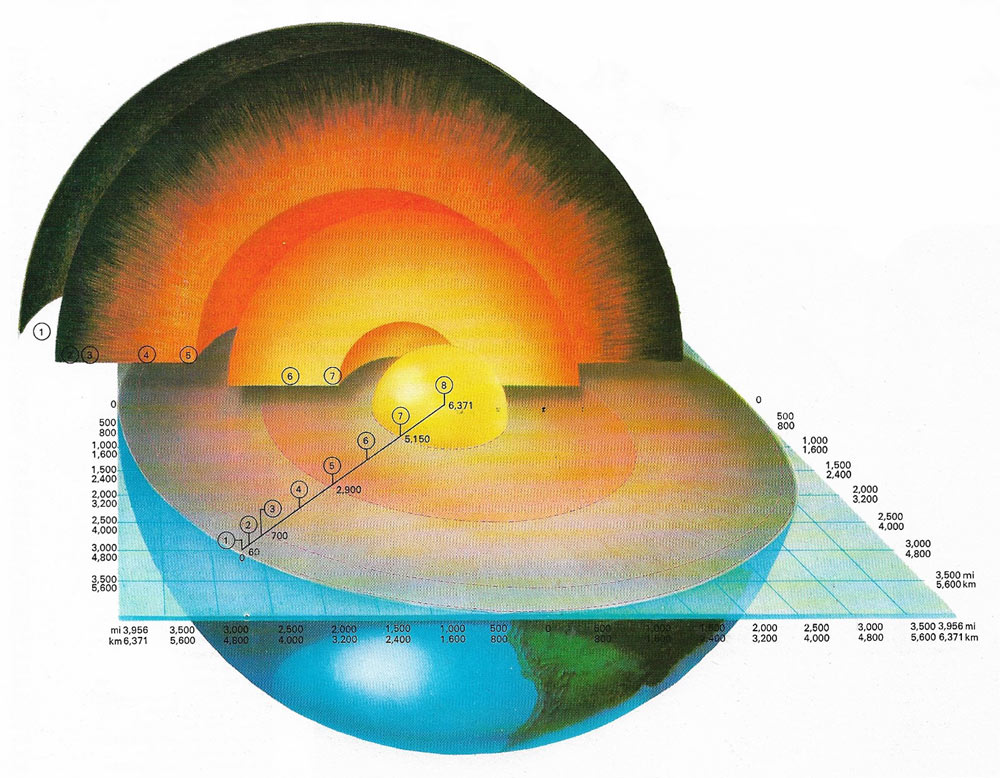 Earth's crust varies in thickness from 40 km (25 miles) to 5 km (3 miles) under the seafloor. With the uppermost mantle it forms the lithosphere (1) which overlays a plastic layer, the asthenosphere (2), on which it may drift sideways. The upper mantle (3) goes down to 70 0km (430 miles) where it overlays the lower mantle (4). The mantle is made of peridotite which is near melting point in the asthenosphere. This at least is the explanation for the slowing-down of seismic waves at those depths and it fits the plate tectonics theory. The increase of density in the lower mantle is thought to be due to increased pressure and packing of the atoms, without a change of chemical composition. The mantle is separated from the outer core (6) by another seismic wave discontinuity, the Gutenberg discontinuity (5). P wave velocity drops from 14 km (9 miles) to 8 km (5 miles) per second and S waves are not transmitted inside the outer core. These observations indicate that the outer core is in a liquid state. The density jumps from 5.5 g/cm3 for the lower mantle to 10 g/cm3 for the outer core where it increases downward to 12 or 13 g/cm3. Although the core is only 16% of Earth by volume, it represents 32% of its mass. The core is thought to consist of iron and nickel, a hypothesis that fits the data and is inspired by the iron-nickel meteorites which are thought to be the remnants of another planet. P waves show anoher discontinuity (7) and increase their speed in the center of Earth or inner core (8), which is solid. 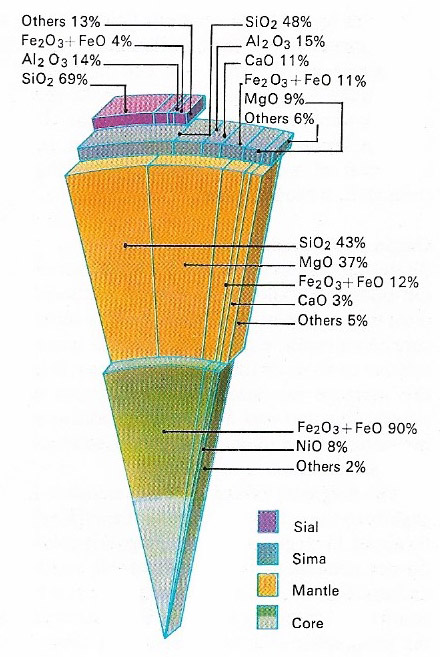 Earth is composed of three main layers – the crust, mantle, and core. The crust is subdivided into continental and oceanic material. The upper continental crust is mostly granite, rich in silicon and aluminum (sial). The oceanic crust is essentially basalt, rich in silicon and magnesium (sima); sima also underlies continental sial. The sial continents, of a lighter material than the sima, tend to float upon it like icebergs in the sea. The mantle consists of rock, rich in agnesium and iron silicates, and the dense core probably consists mainly of iron and nickel oxides in a molten condition. 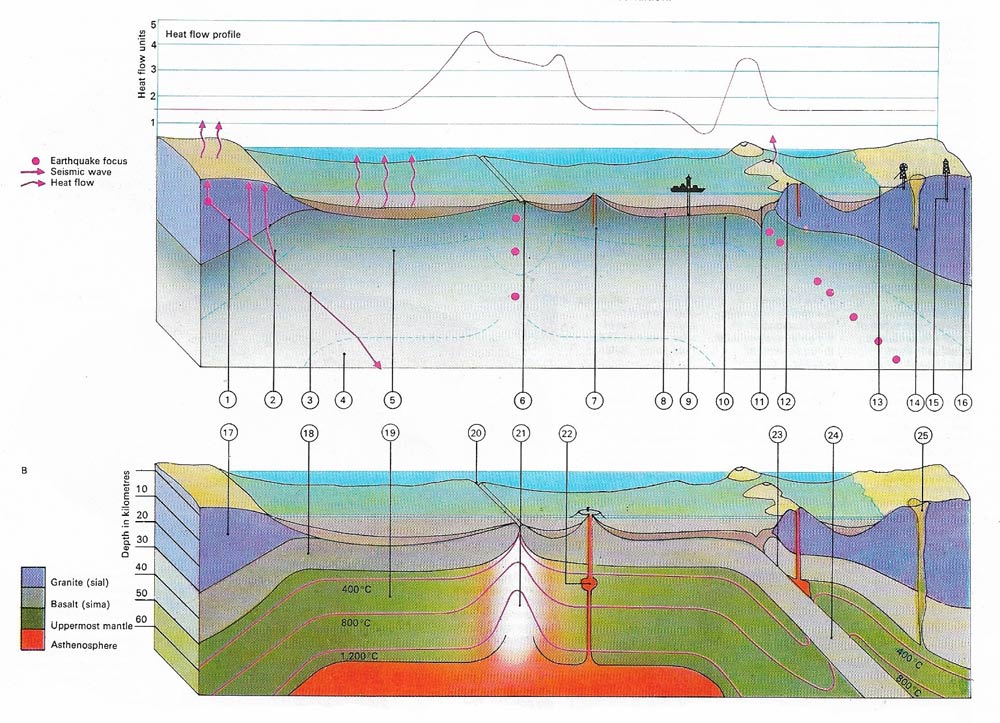 The mantle and crust are studied by various means (upper diagram). Heat flow from Earth's interior is over volcanic areas (7), island arcs (12) and along ocean ridges (6), and low along ocean trenches (11). The zone of direct observation reaches its limits at (9) the deepest marine drill-hole, 1,300 m (4,265 ft) below the seabed, at (13) the deepest mine, 3,848 m (12,600 ft), and (15) the deepest land bore-hole, 9,583 m (31,441 ft). Earthquake foci occur in particular planes. Earthquake shocks generate seismic waves which travel faster the deeper they go through the crust (1,2) Beyond the Mohoroviĉić discontinuity (5) lies the mantle, where the seismic waves enter a high-velocity zone (3), later slowing down in the underlying low-velocity zone (4). Marine sediments (8) accuulate on the ocean floor above the oceanic crust (10). The continental crust (16) lies above the latter. At (14) is a peridotite massif, rich in iron and magnesium, intruded from Earth's interior. All these data are interpreted in (lower diagram). The seafloor crust (18) is composed of basalt, and the continental one (17) of granite overlying a basaltic layer. The mantle (19) is made of peridotite. High heat flow and low-intensity sesms are associated with oceanic ridges (20) where magma ascends from the mantle (21). Sometimes magma is temporarily stored in a magma chamber (22) before it is released by eruption. At (24) the cold lithospheric plate is subducted along the Benioff zone (23), diving into the mantle beneath an adjacent plate and melting magma by friction. Peridotic intrusions (25) have risen through deepcrustasl cracks to the surface.

Earth is made up of several concentric shells, like the bulb of an onion. Each shell has its own particular chemical composition and physical properties. These shells are grouped into three main regions: the outermost is called the crust, which surrounds the mantle; the innermost is the core.

The solid crust on which we live is no thicker in relation to Earth than an egg shell, taking up only 1.5 per cent of Earth's volume. Scientists have been able to learn a great deal about the uppermost part of the crust by direct observation. Their knowledge of Earth's interior, on the other hand, comes from the study of seismic wave paths.

Seismic waves are bent, like light passing through a piece of glass, when they traverse rock boundaries with different densities. If the waves hit the boundary at a low angle, they are reflected instead. Waves from distant earthquakes emerge steeply through the crust while those from earthquakes nearby emerge at shallow angles. By knowing these angles, the velocities at which the waves emerge, their times of arrival and distances traveled, geophysicists have been able to compute the positions and densities of Earth's different shells.

The chemical composition of the crust and upper mantle is known from direct observation of rocks at or near Earth's surface. Below the upper mantle, little is certain, although similarities may exist between iron and stony meteorites and the composition of Earth's deep interior.

The upper crust over continental areas is known as sial (from the first two letters of its most abundant elements, silicon and aluminum). Over oceanic areas, and underlying the continental sial, is the crust called sima (from silicon and magnesium, the two most abundant elements found in it). The sial has a density of 2.7 g/cm3; it is lighter than the sima (density 2.9 g/cm3), and it lies above it to form the continents. The oceanic crust is made of sima with a thin veneer of sediments and lavas.

The crust is separated from the mantle by a sudden change of density (2.9 to 3.3 g/cm3)which shows up as a good reflecting plane for earthquake waves. This plane is known as the Mohoroviĉić discontinuity (Moho for short), after the Croatian who discovered it in 1909, and is taken to represent the base of the crust. The Moho is at an average depth of 35 km (20 miles) under the continents and a mere 10 km (6 miles) below sea-level under the oceans and seas.

The upper mantle consists of a thin rigid top layer extending from below the Moho to a depth of 60–100 km (40–60 miles), a pasty layer or asthenosphere down to about 200 km (120 miles) and a thick bottom layer between 200 and 700 km (120–430 miles). The uppermost layer together with the overlying crust forms the rigid lithosphere which is divided laterally into plates. These plates drift on the asthenosphere where pressure and temperature almost reaching melting point, leading to near-fluidity.

The upper mantle is separated from the lower mantle by another discontinuity, where the rcok density again increases (3.3 to 4.3 g/cm3). Here the composition is thought to be chiefly peridotite, plus minerals of higher density, the latter formed as a result of the crushing pressure of the rocks above.

Between the lower mantle and the core lies a further discontinuity at a depth of 2,900 km (1,800 miles) at which the density increases from 5.5 to 10 g/cm3. This is the Gutenberg discontinuity, discovered in 1914. The core itself is divided at a depth of 5,150 km (3,200 miles) into an outer and an inner zone thought to be composed of iron-nickel alloy. The outer zone is believed to be liquid because it stops S (shearing earthquake waves), while the inner zone is believed to be solid because P (compressional) waves travel slightly faster there. The density changes from 12.3 to about 13.3 g/cm3 at the boundary of outer and inner cores and increases to about 13.6 g/cm3 at the center of Earth, 6,371 km (3,956 miles) down.

Meteorites reaching Earth's surface provide clues as to its composition. Such meteorites are made either of stone or predominantly of iron. The proportion of stony to iron meteorites is more or less equal to the proportion of the mass of the mantle to the core of Earth. Meteorites probably represent the remains of another planet similar to Earth and wich broke up at some unknown period.