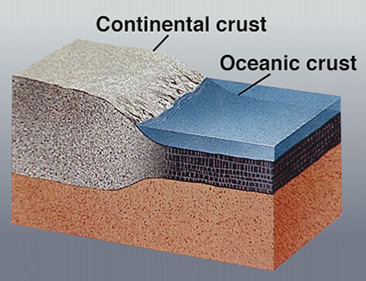 The crust is the solid surface layer of a planet or moon. Earth’s crust, which forms the upper part of the lithosphere, makes up about 0.6% of Earth's volume and 0.4% of its mass. It varies greatly in thickness. Under the oceans, the crust (mainly composed of basalt) ranges between 5 and 11 km (3 and 6.8 mi). Under the continents, the crust (made mostly of granite) ranges between 19 and 64 km (12 and 40 mi) thick. As in the case of other planetary bodies in the inner Solar System, it consists of lighter rocks that rose to the surface when molten, leaving denser materials to form the mantle and core. Large solid bodies in the outer Solar System typically have crusts made of water-ice.