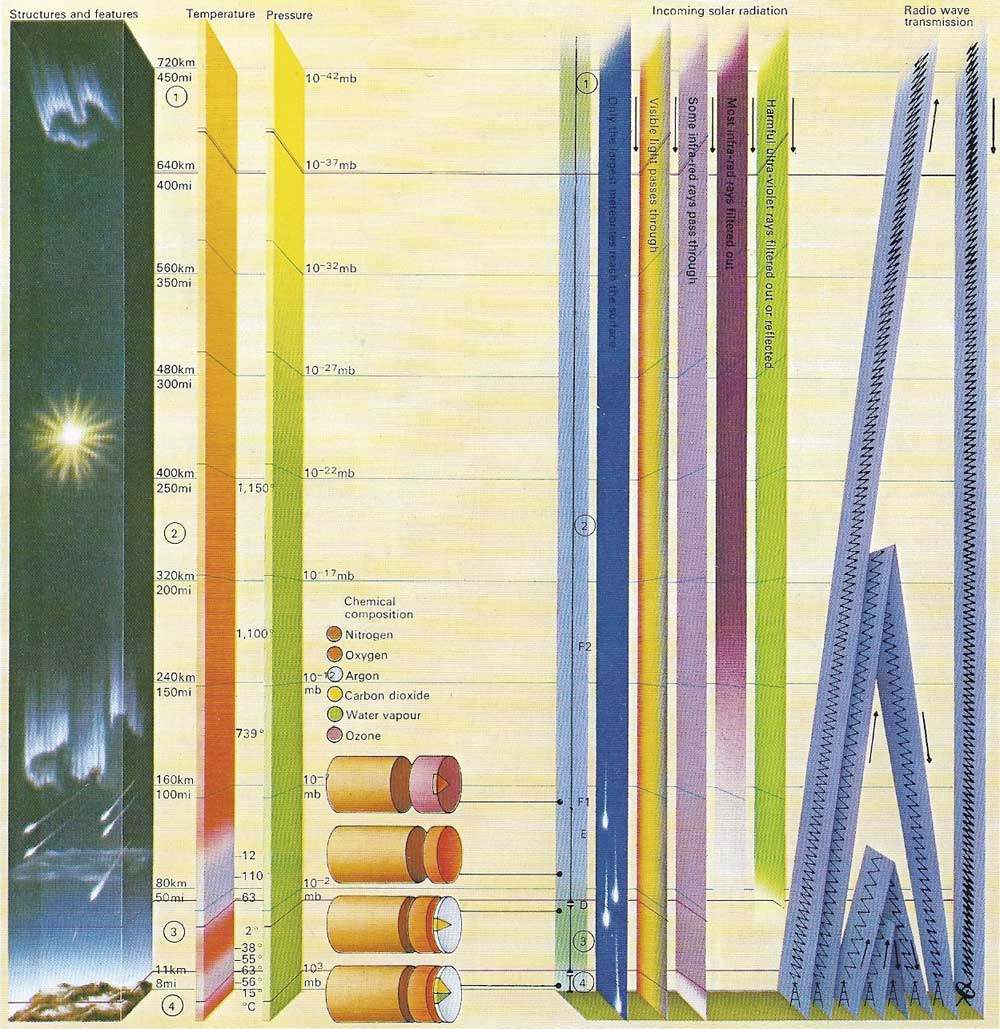 The atmosphere shows a surprising variety of characteristics on a vertical scale. Gravity means that air density and associated pressure increase near the surface. Pressure of about 1,000 millibars (mb) at sea-level falls to virtually nothing (10-42 mb) at a height of 720 km (447 miles). Temperature also varies with height, falling and rising in several layers, ultimately increasing toward outer space. Even the mixture of gases shows variations, with water vapor being added at low levels. Four broad atmospheric layers can be identified. The exosphere (1) is a rarefied region above 400 km (250 miles) with differing proportions of oxygen, helium, and hydrogen. The highest auroras are found in this region. The ionosphere (2), where charged particles (ions and electrons) occur is a deep layer comprising the mesosphere and thermosphere, subdivided into four minor layers (F2, F1, E, and D). Their ion density has a marked effect on radio waves – very high frequency waves penetrate but short-wave transmissions are reflected. The stratosphere (3) contains small but vital amounts of ozone filtering out harmful solar radiation. The troposphere (4) contains the bulk of the atmosphere and all its weather. Together with the outer layers it acts as particle and radiation shield. Temperatures decrease to its upper boundary. 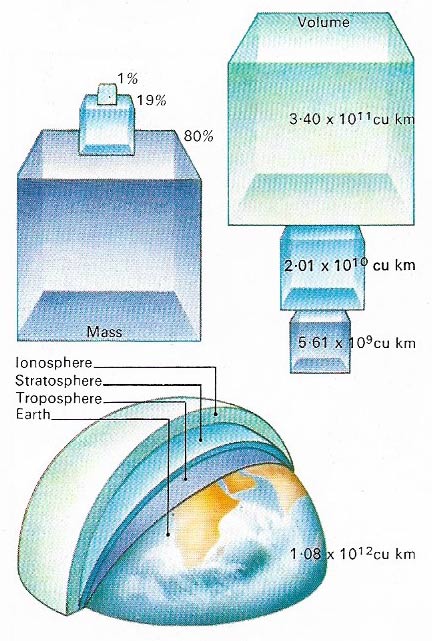 Fig 1. Air is easily compressed, so the atmosphere becomes :squashed" by the effect of gravity. This results in the bulk (80%) of the atmosphere being in the troposphere, occupying a volume of about 6 × 109 cu km. As air density decreases with altitude, the very much smaller amounts of air present in the stratosphere (19%) an the ionosphere and above (1%) occupy a greater and greater volume. 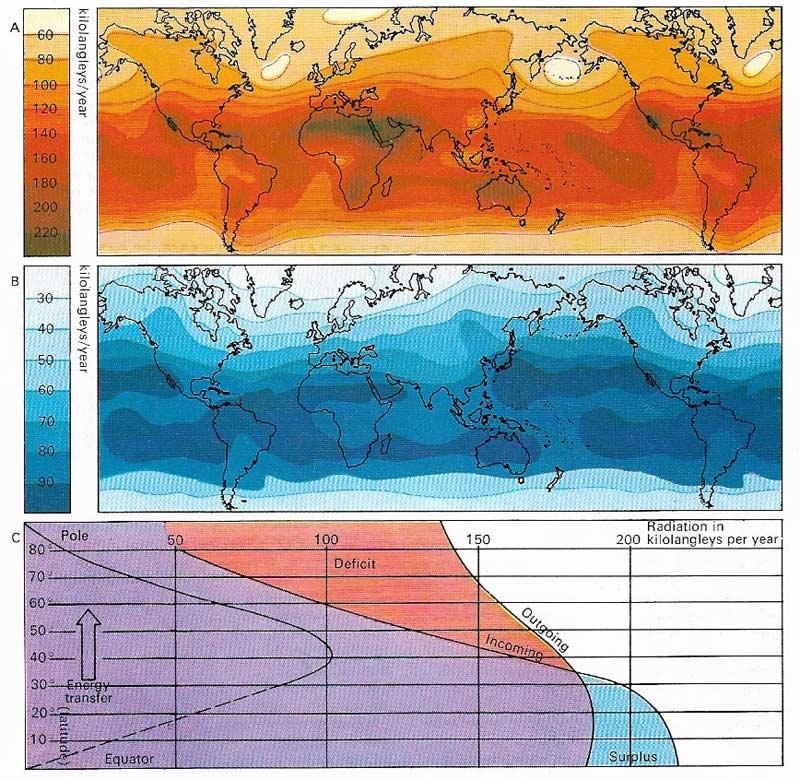 Fig 2. Temperatures in the atmosphere and on Earth result mainly from a balance of radiation inputs and outputs. Average annual solar radiation reaching the Earth, measured in kilolangleys (one calorie absorbed per sq cm) is highest in hot desert areas (A). Comparison with the average annual long-wave radiation back from the Earth's surface (B) shows an overall surplus radiation for nearly all latitudes but this is absorbed in the atmosphere and then lost in space, ensuring an overall balance. The extreme imbalance of incoming radiation between equatorial and polar latitudes is somewhat equalized through heat transfers by atmosphere and oceans (C). This balancing transfer between surplus and deficit radiation is greatest in middle latitudes where most cyclones and anticyclones occur, shown at a latitude of 40° on the chart. 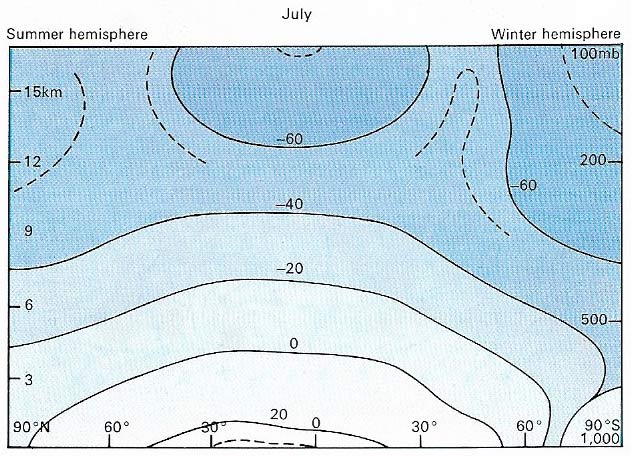 Fig 3. Atmospheric temperatures tend to decrease evenly with increase in height and latitude up to a level called the tropopause at a height of about 9 km (5.5 miles) at the poles rising to 18 km (11 miles) in the tropics. 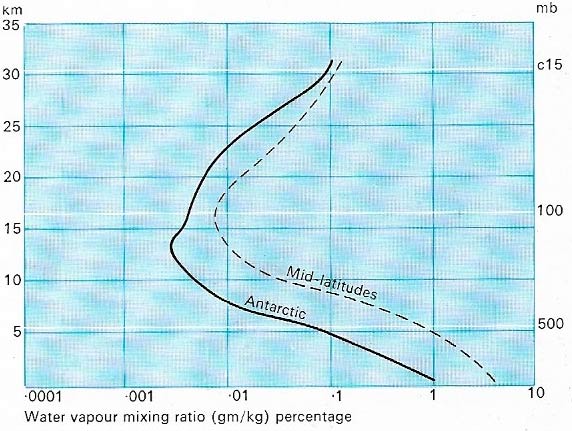 The composition of Earth's atmosphere at sea-level is approximately 78% nitrogen, 21% oxygen, 0.9% argon, and 0.04% carbon dioxide, with variable small amounts of water vapor and pollutants such as sulfur dioxide and carbon monoxide. Variations in temperature define the various layers of the atmosphere, which include, in ascending order, the troposphere, the stratosphere, the mesosphere, the thermosphere, and the exosphere.


Regions of the atmosphere