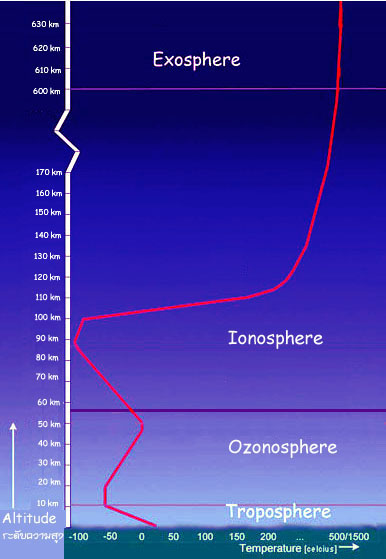 The exosphere is the extremely tenuous, outermost layer of Earth's atmosphere. The exosphere lies above the ionosphere and extends from the so-called exobase, at a height of about 500 km, to the edge of interplanetary space.

At or below the exobase, the atmosphere is sufficiently dense that collisions dominate the motion of gas molecules and atoms; above the exobase, on the other hand, collisions are so infrequent that atoms moving with sufficient velocity have a high probability of escaping from Earth's gravitational field into interplanetary space. Escaping atoms make up only a portion of the exospheric hydrogen, however. There is also a gravitationally bound component that consists both of atoms following ballistic trajectories and of satellite atoms that orbit the Earth for some time before returning to the denser atmosphere.

The density and structure of the exosphere are influenced by a number of factors, including variations in the temperature and density of the atmosphere below the exobase, photoionization and ionization by impact with solar wind particles, charge exchange with the plasma of the plasmasphere, and radiation pressure exerted by solar far-ultraviolet photons.

The term "exosphere" is also used to describe the highly tenuous atmosphere that is the only atmosphere possessed by some planets (such as Mercury) and moons (such as the Galilean satellites).