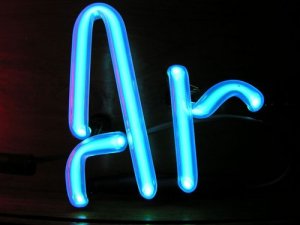 Argon (Ar) is a colorless, odorless, monatomic, highly unreactive gaseous element, which is the third most abundant gas in the Earth's atmosphere (making up approximately 1 percent of the atmosphere). It is obtained commercially by fractionation of liquid air. Argon is the most abundant of the noble gases (inert gases); it makes up 0.93% of the atmosphere by volume, and 99.6% of this is the isotope 40Ar, the remainder being 36Ar (0.34%) and 38Ar (0.06%). It is used in electric light bulbs, fluorescent tubes, electronic valves, argon lasers, and as an inert-gas shield in arc-welding. Argon has no known true compounds.

The discovery of argon was announced Lord Rayleigh and William Ramsay at Oxford in 1894. Its name comes from the Greek argos, meaning "inactive."

Argon beam coagulator ablation is a procedure that destroys tissue with an electrical current passed through a stream of argon gas to the tissue. It is used to treat endometriosis and other conditions, and to stop blood loss during surgery.