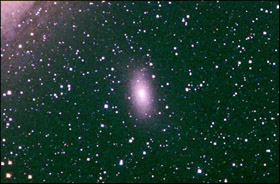 M110 (NGC 205) is one of the two bright satellite galaxies of the Andromeda Galaxy (M31) – the other being M32. Although discovered by Charles Messier in 1773 and depicted in his drawing of the 'Great Andromeda Nebula' (1807), M110 was not included by Messier in his catalogue, for unknown reasons. In fact, it became the last object in the extended Messier list when added by Kenneth Jones in 1966.

Previously described as a dwarf elliptical of type E5 or E6 in Hubble's classification, M110 is now more often classed as a dwarf spheroidal galaxy. However, as it is much brighter than typical dwarf spheroids, Sidney van dan Bergh recently introduced the term 'spheroidal galaxy' to describe it and similar systems, including other Local Group members NGC 147 and NGC 185. Despite its small mass, of some 10 billion solar masses, M110 has a halo containing eight globular clusters – the brightest of them, G73, within reach of large amateur telescopes.