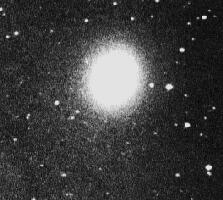 M32 (NGC 221) is a dwarf elliptical galaxy, of type E2 in Hubble's classification, that is a satellite of the Andromeda Galaxy (M31); discovered in 1749 by Guillaume Le Gentil, it was the first elliptical to be found.

M32 can be seen even in small telescopes as a slightly elongated bright patch due south of M31's central region, overlaid on the outskirts of the spiral arms. Although its diameter is only about 8,000 light-years and its total mass about 3 billion solar masses, it has a nucleus comparable to that of M31 itself, with some 100 million solar masses in rapid motion around a central supermassive object. M32 also has a stellar population similar to that of larger ellipticals, including a mixture of mostly old, low-mass stars and some intermediate-age stars richer in heavy elements, though it lacks globular clusters. These facts suggest that M32 may once have been much larger but then lost its outer stars and globular clusters during one or more close encounters with M31. These stars and clusters would have become part of M31's halo. That M32 has recently undergone a close encounter with its larger neighbor is also indicated by disturbances visible in the big galaxy's spiral pattern. M32 contrasts markedly with the other bright satellite of the Andromeda Galaxy – M110.