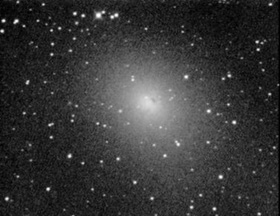 NGC 185, a nearby dwarf elliptical in Cassiopeia.

A dwarf elliptical galaxy is a dim, low-surface-brightness, gas-poor dwarf galaxy, large numbers of which are found in clusters of galaxies, especially in the vicinity of large galaxies. Many of the brighter ones, classified as dE.N, have a well-defined nucleus.

Despite their name, dwarf ellipticals are not really fainter versions of true elliptical galaxies, but are structurally distinct.

Typical dE's have masses of about one billion solar masses, or about 1/1000th that of a typical giant galaxy. They contain very little or no gas, which makes them different from dwarf irregular galaxies. Three relatively bright dE's are known in the Local Group: NGC 147, 185, and NGC 205, all companions of the Andromeda Galaxy. Hundreds of similar galaxies exist in the relatively nearby Virgo Cluster and even more in the large Coma Cluster.

Dwarf ellipticals are of special interest because it is possible that they are very similar to the fragments from which larger galaxies formed. In addition to the brighter dE galaxies, there are much less luminous examples known as dwarf spheroidal galaxies.