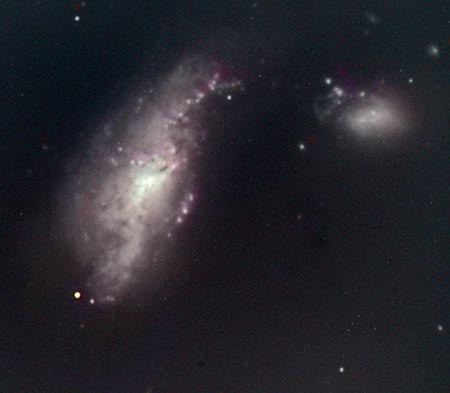 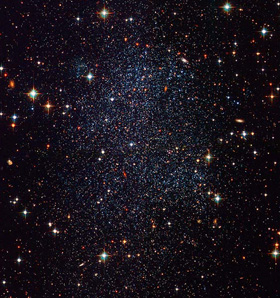 An irregular galaxy is a galaxy, with a poorly-defined structure, that falls outside the categories of disk galaxy or elliptical galaxy. Only about 3% of observed galaxies fall into this category.

Two main types are recognized in the Hubble classification scheme. Type Irr I galaxies are less massive (108 to 1010 solar masses) than large ellipticals or spirals and often have a high gas content and show evidence of extensive star formation. Type Irr II galaxies make up a catchall group that may, in some cases, include interacting and merging systems.

A dwarf irregular galaxy is a dwarf galaxy that lacks any apparent structure or uniformity of shape. A nearby example is the Sagittarius Dwarf Irregular (Fig 2)).

Dwarf irregulars (dI) are becoming increasingly important in understanding the evolution of galaxies in general, because, with many examples nearby, they enable detailed studies of important issues such as the occurrence of galactic winds, the chemical enrichment of the interstellar and intergalactic media, and the photometric evolution of galaxies. In addition, their low level of evolution, as implied by their low metallicity and high gas content, makes these systems the most similar to primeval galaxies and, therefore, the most useful to infer the primordial galaxy conditions. It has also been suggested that dwarf irregulars represent the local counterpart of faint blue galaxies found in excess in deep galaxy counts.