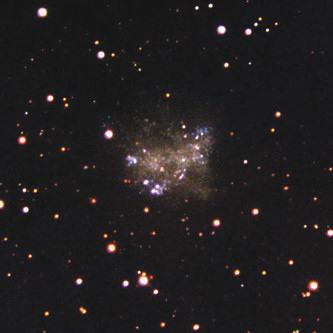 A dwarf galaxy is a small, faint galaxy, of which there are two main types. Dwarf irregular galaxies tend to contain a lot of gas and usually show strong signs of ongoing star formation, whereas dwarf elliptical galaxies (of which dwarf spheroidal galaxies are a subcategory) tend to be gas-poor, lower in mass and luminosity, and quiescent. Dwarf galaxies are the commonest variety in the Local Group and, almost certainly, in the Universe as a whole. In fact, evidence of very extensive halos of thousands of small dwarf systems around large galaxies has been uncovered in a study of gravitational lensing (see dark matter).

Observations by the Chandra X-ray Observatory support the idea that dwarf systems might be responsible for most of the heavy elements in intergalactic space. The orbiting observatory found huge amounts of oxygen and other heavy elements escaping in hot bubbles of gas, thousands of light-years in diameter, from NGC 1569, a dwarf galaxy about 7 million light-years away. For the past 10 to 20 million years, NGC 1569 has been undergoing a burst of star formation and supernova explosions, which have driven heavy elements at high speed into the gas in the galaxy, heating it to millions of degrees and, because of the dwarf's relatively weak gravitational field, causing it to escape from the galaxy altogether. It has been speculated that heavy elements escaping from dwarf galaxies in the early universe may have played a dominant role in enriching the intergalactic gas from which other galaxies form. Enriched gas cools more quickly, so the rate and manner of formation of new galaxies in the early universe would have been strongly affected by this process.

A tidal dwarf galaxy is a self-gravitating entity with the mass of dwarf galaxy, which has been made from tidal material expelled during interactions between larger galaxies. One example is the object known as Ambartsumian's Knot.