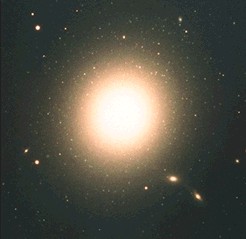 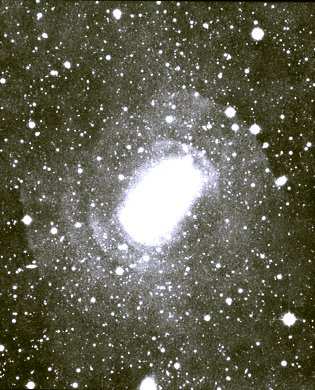 An elliptical galaxy is a galaxy that has a superficially smooth, featureless appearance and an ellipsoidal shape. Giant ellipticals, such as M87, may contain over 10 trillion solar masses in the form of stars, are among the largest of galaxies, and are often found at the heart of rich clusters of galaxies, i.e. those containing large numbers of galaxies in a relatively compact volume of space. Dwarf ellipticals, on the other hand, such as M32 (a satellite of the Andromeda Galaxy) may have masses as low as 10 million solar masses and lie at the bottom end of the galactic size range. Normal ellipticals are quite rare throughout much of space, but form the majority in big clusters. It used to be thought that ellipticals were the oldest galaxies, but more recent studies, including computer simulations, suggest that they have formed from collisions and mergers between spiral galaxies. So-called starburst galaxies appear to show this process in action.

Many old ideas about ellipticals have been shaken up by discoveries made over the past couple of decades. Among these is the notion that ellipticals contain hardly any interstellar matter. When looked at closely, about a third of them show features due to absorption by dust. The dust seems to be distributed in rings or disks, in some cases aligned with either the major or minor axes and in other cases warped. Ellipticals contain modest amounts of cool and warm gas, though not as much as found in spirals galaxies and not usually enough to support much star formation. A few have extended disks of neutral hydrogen. X-ray observations show that many ellipticals contain between 1 billion and 10 billion solar masses of gas at temperatures of 10 million K, typically in the form of a pressure-supported atmosphere around the galaxy. The surface brightness of ellipticals doesn't always decline smoothly with radius. When a smooth luminosity profile is subtracted from the actual surface brightness, concentric shells or ripples are often seen. These shells are somewhat bluer than the rest of the galaxy and appear to be composed of younger stars.

The orbits of stars in ellipticals are in random directions, and often very elongated, taking them close to the center and then far into the outskirts. It was once thought that ellipticals were oblate spheroids – shaped like a hamburger bun – and that they kept this shape because they were slowly rotating. It is now know that they are often prolate, like a rugby ball, or even triaxial, meaning they have different diameters in all three directions. They hardly rotate at all; instead the shape is maintained because the stars move faster in the direction of the long axis, and so can travel further from the center before gravity turns them back.

A shell galaxy is an elliptical galaxy that is surrounded by faint arcs or shells of stars, often more blue than the galaxy as a whole (Fig 2). Shell systems have a variety of morphologies; some galaxies have shells transverse to the major axis and interleaved on opposite sides of the center of the galaxy, while other galaxies have shells distributed at all position angles. The fraction of field ellipticals with shell-like features is at least 17% and may be as much as 44%. They may be the result of galactic cannibalism.

The Faber-Jackson relation is an observed correlation between the random speeds of stars in the center of an elliptical galaxy and the intrinsic luminosity of the galaxy – the higher the random speeds, the more luminous the galaxy. Since the speeds of stars can be directly measured by the Doppler shift in their spectra, the Faber-Jackson relation gives a way of estimating an elliptical galaxy's intrinsic luminosity. By comparing this with the observed brightness, the distance to the galaxy may be inferred. It is named after the American astronomers Sandra Moore Faber (1944–) and Robert Earl Jackson (1949–). See also the Tully-Fisher relation, which is applied to spiral galaxies.