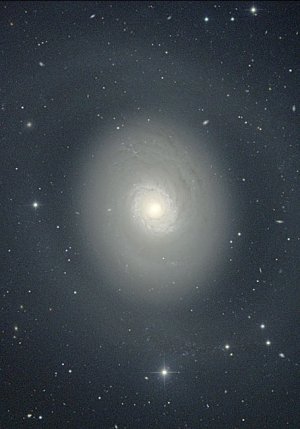 M94 (NGC 4736) is an unusual spiral galaxy (type Sab) in the constellation Canes Venatici. The bright inner region of M94 is surrounded by a ring in which active star formation is taking place as indicated by the presence of luminous, blue clusters. Exterior to this is another, much fainter, ring comprised of an older yellowish stellar population. In the outskirts, this region ends again in a ring with moderate star formation activity, so that M94 is one of a relatively rare class of galaxies in which two waves of star formation are evident. In long exposures, a further very faint ring, about 15 arcmin across, can be seen. According to one theory, the outward moving rings and bursts of star formation are generated by a rotating bar of stars in the galaxy's nucleus.1

M94 was discovered by Pierre Méchain in 1781. It is part of the M94 group of galaxies, which is also known as the Canes Venatici I group.