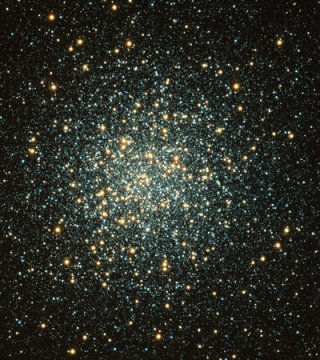 M3 (NGC 5272) is one of the largest and brightest of the 250 or so known globular clusters in the Milky Way Galaxy. M3 contains approximately 500,000 stars, is easily visible with binoculars, and can even be seen with the unaided eye on a clear, dark night. It lies in the constellation Canes Venatici.

M3 has an age of roughly 8 billion years and contains mostly old, red stars. The existence within it of a number of young blue stars was once puzzling to astronomers, but these so-called blue stragglers are now thought to form as a result of stellar interactions.

M3 was discovered by Charles Messier in 1764, and first resolved into stars by William Herschel in about 1784.