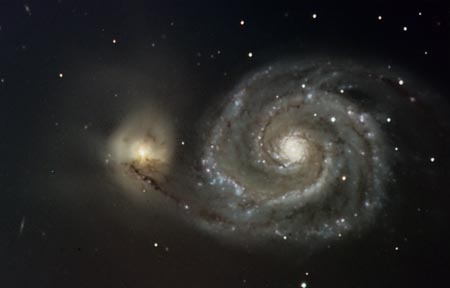 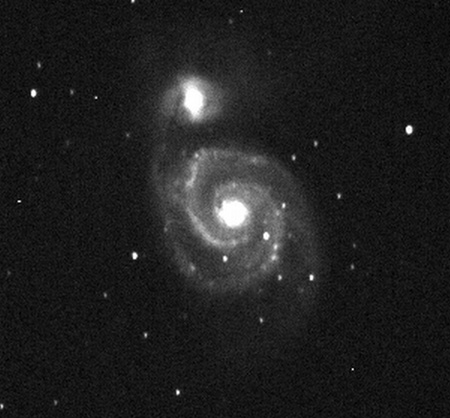 M51, taken (shortly before the supernova illustrated below) using a Celestron C-9.25" on a Losmandy G11 with Gemini; imager is an SBIG ST9XE with CFW9 filter wheel. Image credit: James A. Hardy.

Animation of M51's most recent supernova using images taken by French observer Stéphane Lamotte Bailey with his 8-in telescope on May 30 and Jun 2, 2011.

The Whirlpool Galaxy (M51, NGC 5194) is a large, bright spiral galaxy in the constellation Canes Venatici that is interacting with a much smaller neighbor, NGC 5195. The main galaxy was discovered by Charles Messier in 1773, the companion by Pierre Méchain in 1781.

M51 is the first galaxy in which spiral structure was discovered, by Lord Rosse in 1845. This structure, however, has clearly been influenced by the gravitational effect of the companion, which has triggered a huge burst of star formation in the Whirlpool and has also distorted its arms.

M51 is the dominant member of a small group of galaxies that also includes the Sunflower Galaxy (M63) and half a dozen other smaller systems.

M51 has been the scene of three supernovae between 1994 and 2011. The most recent was initially spotted on May 31, 2011, by French amateur astronomer Amédée Riou, and then picked up independently by other observers over the next day or so. Weidong Li and Alex Filippenko, at University of California Berkeley, identified a likely precursor star in Hubble images taken in Apr 2005. Their analysis suggested that the exploding star, designated SN 2011dh, was likely a yellow supergiant of about 20 solar masses and a visual magnitude of 21.8. SN 2011dh was almost certainly a Type II supernova.