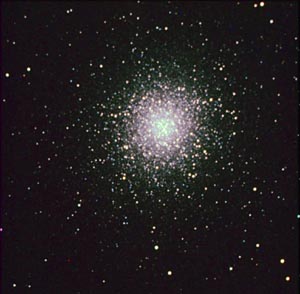 The Hercules Globular Cluster (M13, NGC 6205) is the most prominent globular cluster in the northern half of the sky. It lies in the constellation Hercules and was discovered by Edmond Halley in 1714, who noted that "it shows itself to the naked eye when the sky is serene and the Moon absent."

In small telescopes, M13 appears as a misty patch, denser toward the center; in large scopes it's revealed as a nearly perfect sphere of stars. Although it spans in total well over 150 light-years, the bulk of its more than one million stars are concentrated into a core region whose diameter is under 100 light-years. In this inner domain the average distance between stars is only about 1 light-year compared with a typical gap between stars in the solar neighborhood of just over 3 light-years. M13 was selected in 1974, by Frank Drake and Carl Sagan, as a target for one of the first radio messages addressed to possible extraterrestrial races, sent by the Arecibo Telescope (see Arecibo Message)