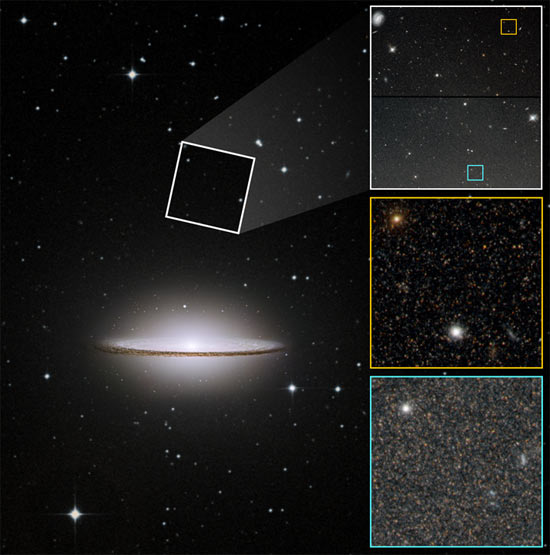 Fig 1. On the left is an image of the entire Sombrero galaxy that includes a portion of the much fainter halo far outside its bright disk and bulge. Hubble photographed two regions in the halo (one of which is shown by the white box). The images on the right zoom in to show the level of detail Hubble captured. The orange box, a small subset of Hubble's view, contains myriad halo stars. The stellar population increases in density closer to the galaxy's disk (bottom blue box). Each frame contains a bright globular cluster of stars, of which there are many in the Sombrero's halo. NASA, Digitized Sky Survey, P. Goudfrooij (STSci) and The Hubble Heritage Team (STSci/AURA).

The Sombrero Galaxy (M104, NGC 4594) is a type Sa spiral galaxy in the constellation Virgo whose unusually large central bulge, richly populated with several hundred globular clusters, and dark prominent dust lanes give it the appearance of a Mexican hat; we see it from about 6° south of its equatorial plane. Discovered by Pierre Méchain in 1781, it became the first galaxy for which a large redshift (equivalent to a recession velocity of about 1,000 km/s) was found, by Vesto Slipher in 1912. It is also the first galaxy in which rotation was detected, again by Slipher. Modern studies have shown the Sombrero to have both a very extended faint halo and a mildly active nucleus indicative of the presence a central supermassive black hole. It's also alone in the sky, not embedded inside a cluster of other galaxies.


Halo of the Sombrero

The data gathered by Hubble surprised scientists, upending expectations set by the halos of other massive galaxies (Fig 1). The Sombrero's halo contained more metal-rich stars than expected, but even stranger was the near-absence of old, metal-poor stars typically found in the halos of massive galaxies. Many of the globular clusters, however, contain metal-poor stars – why were they there, but not in the broader halo? Typically, stars migrate away from their parent clusters as they age. A possible explanation for the Sombrero's perplexing features is that it is the product of the merger of massive galaxies billions of years ago, even though the smooth appearance of the galaxy's disk and halo show no signs of such a huge disruption.