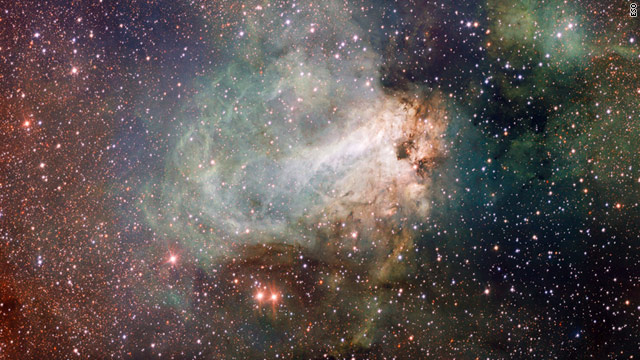 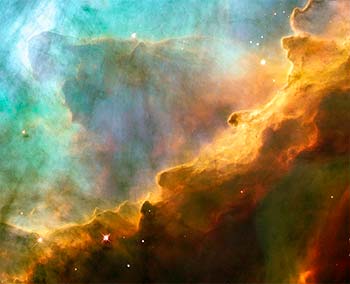 The Omega Nebula (M17, NGC 6618) is a bright emission nebula in northern Sagittarius that is part of an enormous cloud of molecular gas in which star formation is still taking place or has stopped only recently. The Omega Nebula (M17) was discovered by Philippe Loys de Chéseaux in 1745–46, and is also known as the Swan Nebula, the Horseshoe Nebula, and (especially in the southern hemisphere) the Lobster Nebula.

While the visible nebula is about 15 light-years across, the total gaseous cloud, including low-luminosity material, extends to at least 40 light-years. Some 35 bright but obscured stars, each typically about six times hotter and 20-30 times more massive than the Sun, are imbedded in the nebulosity. The radiation from these stars evaporates and erodes the dense cloud of cold gas within which they were formed, exposing dense pockets of gas that may contain other stars in the birthing process. Because these dense pockets are more resistant to the radiation onslaught than is the surrounding cloud, they appear as sculptures in the walls of the cloud or as isolated islands in a sea of glowing gas.

The photograph shown in Fig 2, taken by NASA's Hubble Space Telescope, captures a small region within M17. The image was released to commemorate the thirteenth anniversary of Hubble's launch on Apr 24, 1990.

The wave-like patterns of gas have been sculpted and illuminated by a torrent of ultraviolet radiation from young, massive stars, which lie outside the picture to the upper left. The glow of these patterns accentuates the three-dimensional structure of the gases. The ultraviolet radiation is carving and heating the surfaces of cold hydrogen gas clouds. The warmed surfaces glow orange and red in this photograph. The intense heat and pressure cause some material to stream away from those surfaces, creating the glowing veil of even hotter greenish gas that masks background structures. The pressure on the tips of the waves may trigger new star formation within them.

The image, roughly 3 light-years across, was taken May 29–30, 1999, with the Wide Field Planetary Camera 2. The colors in the image represent various gases. Red represents sulfur; green, hydrogen; and blue, oxygen.