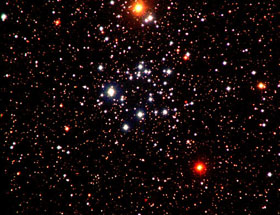 M50 (NGC 2323) is an open cluster in the southern part of the constellation Monoceros, a little to the northeast of Sirius. Containing 80 stars and shining at about 6th magnitude, M50 is an attractive object in binoculars with one reddish sun standing out against the predominantly blue-and-white member stars. Possibly seen by Giovanni Cassini before 1711, it was later seen by Charles Messier in 1772. The Rev. T. W. Webb recorded it as a "Brilliant cluster, straggling, Herschel says to 30'; containing a red star; between Sirius and Procyon, 1/3 nearer the former, in a superb neighborhood, where the Creator has sowed with stars the heaven thick as a field."