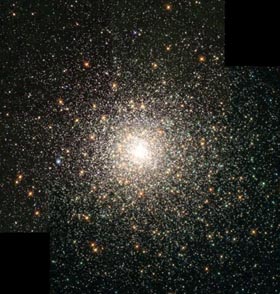 M80 (NGC 6093) is one of the densest known globular clusters in the Milky Way Galaxy; it lies in the constellation Scorpius. M80 contains hundreds of thousands of stars, including a large population of blue stragglers in its core. The cluster has been the site of two known novae: in 1860 (T Scorpii) and in 1938. M80 was discovered by Charles Messier on 4 January 1781. Though not very conspicuous, M80 can be located easily as it is lies almost exactly halfway between Antares (Alpha Scorpii) and Graffias (Beta Scorpii), just below the declination parallel of Dschubba (Delta Scorpii).