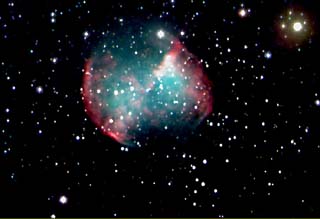 The Dumbbell Nebula (M27, NGC 6853), named after its doubled-lobed appearance, is one of the brightest and best known of planetary nebulae. It lies in Vulpecula, was the first planetary to be discovered, by Charles Messier in 1764, and is the easiest object of its type to see with a small telescope. The bright portion of the nebula is expanding at a rate of 6.8" per century, leading to an estimated age of 3,000 to 4,000 years. It is seen from our vantage point roughly along its equatorial plane. However, if it were to be viewed from near one pole, it would probably have the shape of a ring and perhaps appear similar to the Ring Nebula. The central star of M27 is quite bright at magnitude 13.5 and may have a faint (magnitude 17) yellow companion 6.5" away.