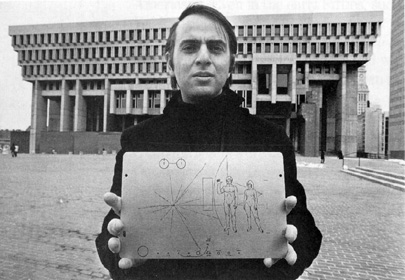 The Pioneer plaque is a 15-cm by 23-cm (6-in by 9-in) gold-anodized aluminum plate fixed to the antenna support struts of Pioneer 10 and Pioneer 11. It carries an information-rich message, devised by Carl Sagan and Frank Drake, in the event that either of the spacecraft is detected and recovered in the remote future by advanced extraterrestrials. The message is intended to communicate the location of the human race, the appearance of an adult male and female of our species, and the approximate era when the probe was launched. A line-drawing of a naked couple standing in front of the Pioneer probe is accompanied by an ingenious scheme for conveying distance, direction, and time information about the spacecraft's origins.

At the top left of the plaque is a schematic representation of the energy transition between the parallel and antiparallel proton and electron spins in the neutral hydrogen atom. It is this transition which is responsible for the 21-centimeter line (giving a standard distance) at 1,420 megahertz (giving a standard time) by clouds of atomic hydrogen in space. Any space-faring race, it is assumed, would be aware of the significance of this most fundamental transition. As a check, the plaque also shows the number 8 in binary (1---) between two tote marks, indicating the height of the Pioneer probe. The fact that this height is close to 8 times 21 cm will serve to verify that the symbol at the top left does indeed represent the 21-cm hydrogen transition. Further binary numbers accompany the lines in the spoke-like pattern to the left of center of the message. Evidently, they are either distances or times in terms of the characteristic wavelength or frequency of the hydrogen transition. If interpreted as distances, they correspond roughly to interplanetary ones. This would not be reasonable information to communicate since the separations between objects in a planetary system are continually changing. If (correctly) interpreted as times, however, they yield values in the range 0.1 to 1 sec. These are characteristic of the periods of pulsars, which are very precise and slow down, over long periods of times, at a predictable rate. An intelligent recipient civilization, it is hoped, would be able to compare its current maps and timings of pulsars with the relative positions and timings given on the Pioneer plaque and, as a result, pinpoint the probe's home star and its year of launch.

math as a universal language