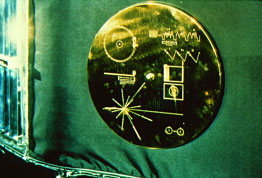 The Voyager interstellar record is a gold-coated phonograph record containing, in audio-encoded form, 117 pictures explaining our planet and ourselves; greetings in 54 different human languages and "songs" of the humpback whales; a representative selection of sounds, from an elephant's trumpet to a rocket launching; and almost 90 minutes of some of the world's greatest music.

Copies of the record were attached to the side of Voyager 1 and Voyager 2 in the event of these craft being intercepted at some point in the remote future by an extraterrestrial intelligence. Among those involved in the preparation of the disk were Frank Drake, Carl Sagan, and Bernard Oliver.