humpback whales and their songs 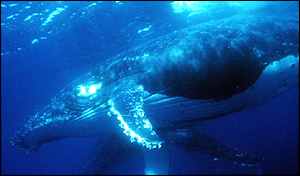 Although all toothed whales and dolphins generate a wide variety of vocalizations, the most extraordinary range and complexity of sounds are produced by the male humpback whale (Megaptera novaeangliae). The mournful calls of these cetaceans can be heard for hours at a stretch in the winter breeding grounds of the Caribbean and Hawaii. Elaborate phrases, each a slightly different length, are repeated over and over again. Each can last up to 20 min and be heard 20 mi (30 km) away. A male may sing for hours, repeating the song several times. Within one season, all male humpbacks from the same area sing broadly the same song that evolves over time. Part of a song may change rapidly for several months and then remain unchanged while other parts are modified. After about 8 years, an entirely new song appears.

How much information the whales exchange via their calls is still unknown, but there have been some intriguing suggestions. In 1999, John Buck and Ryuji Suzuki of the University of Massachusetts, Dartmouth, claimed they had found evidence for a hierarchical grammar like that of human language in the humpbacks' songs; other researchers, however, remain skeptical.

Humpback whales are well known for their long pectoral fins, which can be up to 15 ft (4.6 m) in length. Their scientific name means "big-winged New Englander" as the New England population was the one best known to Europeans. These long fins give them increased maneuverability; they can be used to slow down or even go backwards.

Similar to all baleen whales, adult females are larger than adult males, reaching lengths of up to 60 ft (18 m). Their body coloration is primarily dark gray, but individuals have a variable amount of white on their pectoral fins and belly. This variation is so distinctive that the pigmentation pattern on the undersides of their flukes is used to identify individual whales, similar to a humans fingerprint.

Humpback whales are the favorite of whale watchers, as they frequently perform aerial displays, such as breaching (jumping out of the water), or slap the surface with their pectoral fins, tails, or heads.

In the summer, humpbacks are found in high latitude feeding grounds such as the Gulf of Maine in the Atlantic and Gulf of Alaska in the Pacific. In the winter, they migrate to calving grounds in subtropical or tropical waters such as the Dominican Republic in the Atlantic and the Hawaiian Islands in the Pacific. The Arabian Sea humpback, however, does not migrate, remaining in tropical waters all year.

Humpback whales travel great distances during their seasonal migration, the farthest migration of any mammal. The longest recorded migration was 5,160 mi (8,300 km). This trek from Costa Rica to Antarctica was completed by seven animals, including a calf. One of the more closely studied routes is between Alaska and Hawaii, where humpbacks have been observed making the 3,000-mi (4,830-km) trip in as few as 36 days.

During the summer months, humpbacks spend the majority of their time feeding and building up fat stores (blubber) that they will live off of during the winter. Humpbacks filter feed on tiny crustaceans (mostly krill), plankton, and small fish and can consume up to 3,000 lb (1360 kg) of food per day. Several hunting methods involve using air bubbles to herd, corral, or disorient fish. One highly complex variant, called "bubble netting," is unique to humpbacks. This technique is often performed in groups with defined roles for distracting, scaring, and herding before whales lunge at prey corralled near the surface.

In their wintering grounds, humpback whales congregate and engage in mating activities. Humpbacks are generally "polygynous" with males exhibiting competitive behavior on wintering grounds. Aggressive and antagonistic behaviors include chasing, vocal and bubble displays, horizontal tail thrashing, and rear body thrashing. Males within these groups also make physical contact; striking or surfacing on top of one another. These bouts can cause injuries ranging from bloody scrapes to, in one recorded instance, death.

Gestation lasts for about 11 mo. Newborns are 13 to 16 ft (4 to 5 m) long and grow quickly from the highly nutritious milk of their mothers. Weaning occurs between 6 and 10 mo after birth. Mothers are protective and affectionate towards their calves, swimming close and frequently touching them with their flippers. Males do not provide parental support for calves. Breeding usually occurs once every two years, but sometimes occurs twice in three years.

Humpback whales live in all major oceans from the equator to sub-polar latitudes.

During migration, humpbacks stay near the surface of the ocean. While feeding and calving, they prefer shallow waters. During calving, humpbacks are usually found in the warmest waters available at that latitude. Calving grounds are commonly near offshore reef systems, islands, or continental shores.

Once heavily exploited, the humpback has been protected since the mid-1960s and is increasing in many parts of the world. There are probably now more than 30,000 in the Southern Hemisphere, 15,000 in the North Atlantic and 18,000 in the North Pacific. Four whales per year can be taken by aboriginal subsistence hunters in St Vincent and the Grenadines.