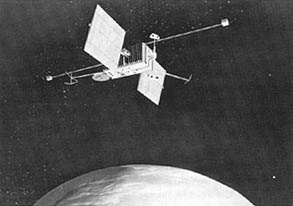 Artist's concept of an OGO in orbit.

Orbiting Geophysical Observatory (OGO) was a series of NASA spacecraft designed to study various geophysical and solar phenomena in Earth's magnetosphere and in interplanetary space. Their orbits were chosen, with low perigees (points of minimum altitude) and high apogees (points of maximum altitude), so that they could sample an enormous range of the near-Earth environment. Each OGO consisted of a main body, two solar panels each with solar-oriented experiments, two orbital plane experiment packages, and six boom experiment packages.

The concept for an observatory-class satellite evolved in late 1959 and early 1960 from that of a larger general-purpose scientific satellite (as opposed to the special-purpose Explorers), which would be a standardized spacecraft housing a variety of instruments to be flown regularly on standardized trajectories. "Orbiting Observatory" became the term used for this class of spacecraft, and "Orbiting Geophysical Observatory" developed as a functional description for this particular satellite. The names "EGO" and "POGO" also were developed during this period to apply to OGO satellites in particular orbital trajectories: highly eccentric (Eccentric Geophysical Observatory) and polar orbit (Polar Orbiting Geophysical Observatory).