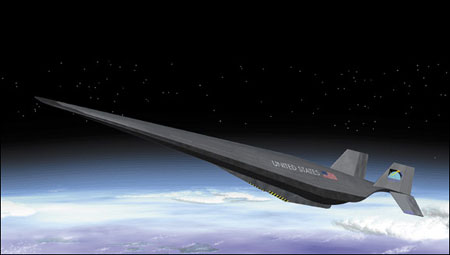 Hypersonic speeds are those greater than Mach 5 (five times the ambient speed of sound). At such speeds, the temperature in the boundary layer and on the surface of the moving vehicle exceeds 1,800°F (1,000°C) and aerodynamic heating becomes important in aircraft design.

The V-2 rocket was the first human-made object to achieve hypersonic flight. In Feb 1949, its upper stage reached a maximum velocity of 5,150 mph (8,288 km/h) – more than five times the speed of sound. The vehicle, however, burned up on reentry, and only charred remnants were found. In April 1961, Russian Yuri Gagarin became the first human to travel at hypersonic speed, during the world's first piloted orbital flight. Soon after, in May 1961, Alan Shepard became the first American and second person to achieve hypersonic flight when his capsule reentered the atmosphere at a speed above Mach 5 at the end of his suborbital flight over the Atlantic Ocean. In June, Air Force Major Robert White flew the X-15 research airplane at speeds over Mach 5, and broke his own record in November, reaching Mach 6.7.


Characteristics and problems of hypersonic flight

High-speed flight has a significant effect on airflow that is related to the elasticity (compression and expansion) of the air. At the slowest speeds, subsonic, these effects are small and the air is treated as if it were incompressible. But as airflow velocities increase, the air becomes compressed, and pressure begins to build up ahead of each part of the aircraft, until finally distinct pressure waves, or shock waves, form. At supersonic speeds, the shock waves are distinct and trail behind any object that interferes with the airstream in the form of a wedge, or cone. While a shock wave is normally less than 0.001 in (0.0254 mm) thick, the air undergoes large changes in pressure, density, and temperature across this boundary. These effects even extend to the ground in the form of sonic booms.

These shock waves make testing of hypersonic vehicles difficult, and require the use of special hypersonic wind tunnels. These tunnels need more power to increase air pressure to the necessary point and to heat the temperature of tunnel air in the chamber preceding the nozzles that eject the air into the test area typically to 3,000°F (1,649°C) so that the air in the testing section, chilled to -350°F (-212°C), does not liquefy. Aerodynamicists in the 1950s feared that hypersonic tunnel tests might prove of little value in predicting actual flight conditions. However, the flights with the X-15 research plane in the early 1960s disproved this as predicted wind tunnel data generally agreed with data produced through airplane flight tests. Test data proved that hypersonic laminar flow conditions did not develop, which led to the recognition that the small surface irregularities that prevented laminar flow at low speeds also prevented its formation at hypersonic speeds.

In the hypersonic region, the equations of supersonic flow at this point no longer apply, and many interactions between shock waves and the flow field occur. One major effect is the decrease in lifting effectiveness of the wings and tail surfaces because the shock waves weaken the aerodynamic forces. Even more important, the friction of the air flowing along any surface raises the air temperature to many times that of the surrounding atmosphere. This shock wave pattern dictates that airplanes traveling at hypersonic speeds have a highly swept, wedge-shaped wing, possibly merged into the fuselage so that the two components form an integrated unit.

The interaction between the shock layer and the boundary layer can affect drag and can also cause unusual thermal reactions, contributing significantly to aerodynamic heating, a product of the frictional effect of the high-speed airflow over the vehicle's surface. The flow fields around vehicles traveling at hypersonic speeds actually become so hot that the nitrogen and oxygen molecules in the air dissociate, meaning that the heat destroys the molecular bond between those elements. Individual atoms move in the airflow and various chemical reactions form new compounds, making the behavior of the atmosphere even more complex. When the airflow reaches hypersonic velocities, the science of thermodynamics, by necessity, becomes an additional focus. The combined discipline of aerodynamics and thermodynamics has been named aerothermodynamics.

Aerodynamicists soon realized that the slender aircraft body suited to supersonic flight was unsuited to hypersonic flight. Rather, they found that a blunt-nose body experienced much less heating than a pointed body, which would burn up before reaching the Earth's surface. The blunt reentry body, discovered in 1951 by H. Julian Allen, an engineer with the NACA's Ames Research Center, created a stronger shock wave at the nose of the vehicle and dumped a good deal of the reentry heat into the airflow, making less heat available to heat the reentry vehicle itself. This finding was so significant, and so in contrast with intuitive thinking, that it was classified for a while. But by 1958, Allen's work became public, and all successful reentry vehicles since have used the blunt body.

The Space Shuttle is an example of an aircraft that operates at hypersonic speeds, reaching an orbital speed of about 18,000 mph or about 5 mi/s (8 km/s). But since there is practically no atmosphere at the Shuttle's final orbital altitude, ordinary rules of aerodynamics do not apply. It is during reentry that atmospheric hypersonic flight conditions appear. The Shuttle reaches Mach numbers above 10 and surface temperatures of 11,000°F (6,000°C), which are handled by the ceramic tiles that coat the orbiter, before it encounters the dense air that produces aerodynamic drag that helps it slow and land.

The behavior and characteristics of hypersonic airflow are extremely complex and difficult to analyze. While there is some understanding of the pressures and heat input along the wing and the fuselage of an aircraft traveling at hypersonic speeds, the areas where different aircraft structures meet, such as between the wing and fuselage and the tail and fuselage, are areas of "chaotic combinations" of multiple shock waves and interference, especially when an aircraft is traveling at high angles of attack. These areas also experience uneven pressure and heating, resulting in unknown loads and thermal stresses. There is also the challenge of developing powerplants to produce the thrust necessary for sustained hypersonic flight; the scramjet (supersonic combustion ramjet) is attempting to meet this challenge.