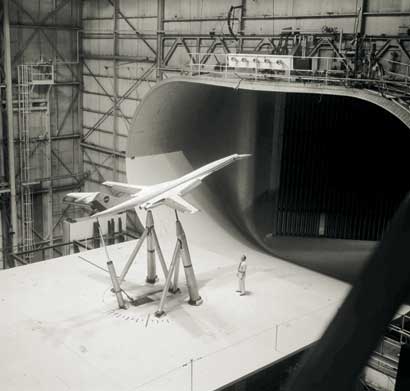 A model of a supersonic transport being tested in a wind tunnel at NASA's Langley Research Center in July 1973. Credit: NASA.

Aerodynamics is the branch of physics dealing with the flow of air or other gas around a body in motion relative to it. Aerodynamic forces depend on the body's size, shape, and velocity; and on the density, compressibility, viscosity, temperature, and pressure of the gas. At low velocities, flow around the body is streamlined (see streamlining) or laminar, and causes low drag; at higher velocities turbulence occurs, with fluctuating eddies, and drag is much greater. Streamlined objects, such as airfoils, are designed to maintain laminar flow even at relatively high velocities. Pressure impulses radiate at the speed of sound ahead of a moving body; at supersonic velocities these impulses pile up, producing a shock wave, and, in some cases, an associated sonic boom.

In airplane design all of these factors must be considered. In normal cruising flight all the forces acting on a plane must balance (see forces of flight). The lift provided by the wings must equal the aircraft's weight; the forward thrust of the engines must balance the forces of drag. Lift occurs because the wing's upper surface is more convex, and therefore longer, than the lower surface. Air must therefore travel faster past the upper surface than past the lower, which leads to reduced pressure above the wing.