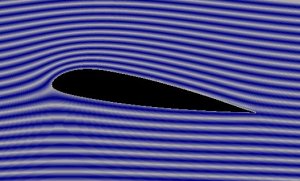 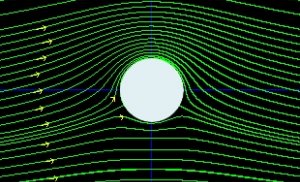 Streamlining is the shaping of an object, such as an aircraft body or wing, to reduce the amount of drag or resistance to motion through a stream of air. A curved shape allows air to flow smoothly around it. A flat shape fights air flow and causes more drag or resistance. Streamlining reduces the amount of resistance and increases lift. To produce less resistance, the front of the object should be well rounded and the body should gradually curve back from the midsection to a tapered rear section.

A streamline is a path traced out by a massless particle as it moves with the flow. It is easiest to visualize a streamline if we move along with the body (as opposed to moving with the flow). The diagrams here show the computed streamlines around an airfoil and around a cylinder. In both cases, we move with the object and the flow proceeds from left to right. Since the streamline is traced out by a moving particle, at every point along the path the velocity is tangent to the path. Since there is no normal component of the velocity along the path, mass cannot cross a streamline. The mass contained between any two streamlines remains the same throughout the flowfield. We can use Bernoulli's law to relate the pressure and velocity along the streamline. Since no mass passes through the surface of the airfoil (or cylinder), the surface of the object is a streamline.