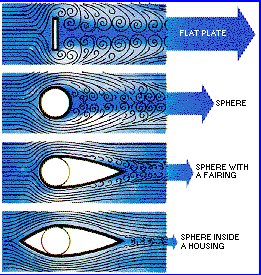 Fig 1. Form or pressure drag is caused by the separation of air that is flowing over the aircraft or airfoil. Credit: Civil Air Patrol.

Fig 2. The leading edge of a wing will always produce a certain amount of friction drag. Credit: Civil Air Patrol. 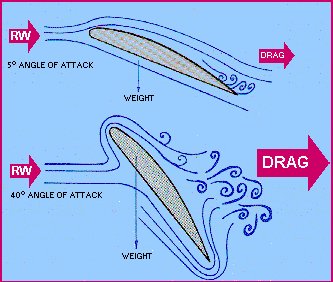 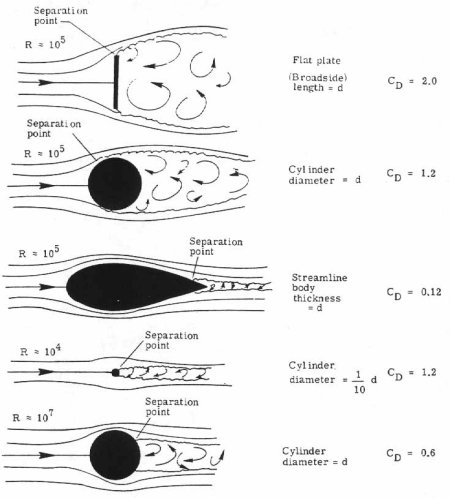 Drag is the resistance to motion through a fluid. As applied to aircraft and spacecraft passing through the atmosphere, it is the component of the resultant force due to relative airflow measured parallel to the direction of motion. It is directly opposed to thrust. Lift is one of the four forces of flight acting on an airplane, the others being weight, thrust, and lift.

Drag is generated by nine conditions associated with the motion of air particles over an aircraft. There are several types of drag – form, pressure, skin friction, parasite, induced, and wave – which are described below.

The term 'separation' refers to change from the smooth flow of air as it closely hugs the surface of a wing to where it suddenly breaks free of the surface, creating a chaotic flow. The picture to the right shows examples of air flowing past a variety of objects. The bottom shows well behaved, laminar flow (flow in layers) where the flow stays attached (close to the surface) of the object. The object just above has a laminar flow for the first half of the object and then the flow begins to separate from the surface and form many chaotic tiny vortex flows called vortices. The two objects just above them have a large region of separated flow. The greater the region of separated flow, the greater the drag. This is why airplane designers go to such effort to streamline wings and tails and fuselages – to minimize drag.

Form drag and pressure drag (Fig 1) are virtually the same type of drag. Form or pressure drag is caused by the air that is flowing over the aircraft or airfoil. The separation of air creates turbulence and results in pockets of low and high pressure that leave a wake behind the airplane or airfoil (thus the name pressure drag). This opposes forward motion and is a component of the total drag. Since this drag is due to the shape, or form of the aircraft, it is also called form drag. Streamlining the aircraft will reduce form drag, and parts of an aircraft that do not lend themselves to streamlining are enclosed in covers called fairings, or a cowling for an engine, that have a streamlined shape. Airplane components that produce form drag include (1) the wing and wing flaps, (2) the fuselage, (3) tail surfaces, (4) nacelles, (5) landing gear, (6) wing tanks and external stores, and (7) engines.

All of these types of drag must be accounted for when determining drag for subsonic flight. The total drag is the sum of parasite and induced drag.

Interference drag can be minimized by proper fairing and filleting, which induces smooth mixing of air past the components. No adequate theoretical method will predict interference drag; thus, wind tunnel or flight-test measurements are required. For rough computational purposes, a figure of 5% to 10% can be attributed to interference drag on a total aircraft.

Small items also add to the total aircraft drag and, although seemingly trivial, they can greatly reduce the aircraft's top speed.

Although prediction of drag and wind tunnel drag measurements of models yield good results, final drag evaluation must be obtained by flight tests.

The airplane's total drag determines the amount of thrust required at a given airspeed. Thrust must equal drag in steady flight.

The equation used to calculate drag is:

Where ρ is the density of the air, V is the velocity of the air (air speed), S is the cross-sectional area of the object, and CD is the drag coefficient. All of these quantities, except Cd, are directly measurable in a wind tunnel. Thus Cd, a dimensionless number, can be thought of as a 'fudge factor' that accounts for all of the aerodynamic peculiarities of a shape (see Figure 4).

Base drag is a component of aerodynamic drag caused by a partial vacuum in the rocket's tail area. The vacuum is the hole created by the rocket's passage through the air. Base drag changes during flight. While the motor is firing, the drag is minimal since the tremendous volume of gas generated by the motor fills this void. The drag takes a sharp jump at burnout when this gas disappears.

Base drag can be reduced by the use of a boattail to transition the main body diameter down to the motor diameter which helps direct air into the evacuated area. When properly designed, a boattail can reduce base drag below zero (i.e. actually generate a small amount of forward thrust) by making use of the "pumpkin seed" effect.