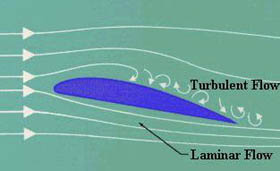 Laminar flow is non-turbulent flow in parallel layers that have different velocities. The term laminar flow describes one of the three types of behavior that a boundary layer can exhibit. (The other two are transitional and turbulent.) In laminar flow, fluid particles travel along well-ordered non-intersecting paths.

When a fluid (such as air) moves (or flows) past a solid surface, such as an airplane wing, a thin layer develops adjacent to the surface where frictional forces tend to retard the motion of the fluid. This layer is defined as the boundary layer. The boundary layer generally exists in one of three states and behaves in a corresponding fashion: (1) laminar, where fluid particles travel along well-ordered non-intersecting paths, or layers; (2) transitional, where disturbances become amplified causing smooth "layered" flow to become disrupted with some mixing of particles between layers; and (3) turbulent, where fluid particles from adjacent layers become totally mixed.