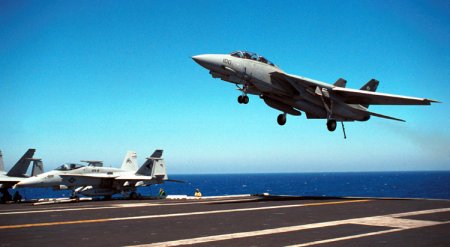 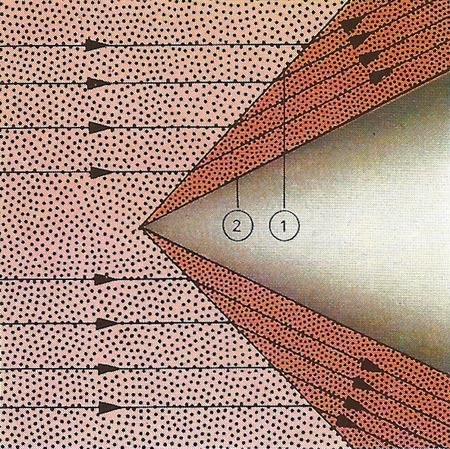 When the velocity of a gas is low compared to that of sound its flow can be described without considering the compressibility. Above 0.3 of the speed of sound (Mach 1) a gas is compressed when it meets a solid and there is a consequent temperature change. Above Mach 1 compression occurs abruptly and a shock wave forms. The diagram shows a Mach 4 shock wave [1] at an aircraft nose-cone [2]. At the shock-front the direction of flow changes and the gas becomes more dense.

A supersonic speed is one that is greater than the speed of sound. Typical speeds for supersonic aircraft are greater than 750 mph but less than 1,500 mph, and the Mach number M is greater than one and less than 3. Above Mach 5, the term hypersonic is used. Many of the techniques used to delay the rise of drag in transonic flight also are directly applicable in designing the airplane to fly with minimum wave drag in the supersonic regime.

A bow shock wave will exist for free-stream Mach numbers above 1.0. In three dimensions, the bow shock is in reality a cone in shape (a Mach cone) as it extends back from the nose of the airplane. As long as the wing is swept back behind the Mach cone, there is subsonic flow over most of the wing and relatively low drag. A delta wing has the advantage of a large sweep angle but also greater wing area than a simple swept wing to compensate for the loss of lift usually experienced in sweepback (see wing types). But, at still higher supersonic Mach numbers, the Mach cone may approach the leading edge of even a highly swept delta wing. This condition causes the total drag to increase rapidly and, in fact, a straight wing (no sweep) becomes preferable.

Sweepback has been used primarily in the interest of minimizing transonic and supersonic wave drag. At subsonic Mach numbers, however, the disadvantages dominate. They include high induced drag (due to small wing span or low aspect ratio), high angles of attack for maximum lift, and reduced effectiveness of trailing-edge flaps. The straight-wing airplane does not have these disadvantages. For an airplane that is designed to be multimission, for example, cruise at both subsonic and supersonic velocities, it would be advantageous to combine a straight wing and swept wing design. This is the logic for the variable sweep or swing-wing. Although not necessarily equal to the optimum configurations in their respective speed regimes, it is evident that an airplane with a swing-wing capability can, in a multimissioned role, over the total speed regime, be better than the other airplanes individually. One major drawback of the swing-wing airplane is the added weight and complexity of the sweep mechanisms. But technological advances are solving these problems also.

The first powered aircraft to explore this regime was the Bell X-1A, in 1947. It and subsequent experimental aircraft proved that humans could fly supersonically. The aerodynamics of these early aircraft is used on modern supersonic fighter aircraft.

There have been several efforts to develop cost-effective supersonic airliners. The Russian TU-144 and the Anglo-French Concorde went into service in the early 1970s but were financial failures. Because of the high drag associated with supersonic flight, fighter aircraft use high thrust gas turbine propulsion systems. The image shown here is of an F-14 which is powered by two afterburning turbofan engines. The wings of supersonic fighters are swept in planform to reduce drag. The F-14 is unique because the amount of sweep can be varied by the pilot; low sweep for good low speed performance, high sweep for supersonic flight. For Mach numbers less than 2.5, the frictional heating of the airframe by the air is low enough that light weight aluminum is used for the structure.