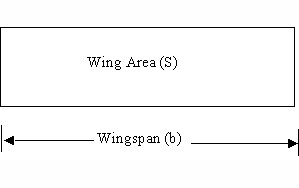 The aspect ratio is the square of the wingspan divided by the platform area of the wing: AR = b2/S.