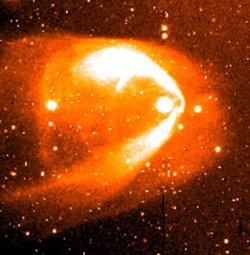 Bow shock around the BZ Cam binary star system as it moves through the surrounding interstellar gas.

A bow shock is the interface that forms between a supersonic fluid and an obstacle, such as a denser medium. Many examples are found in astronomy. A bow shock forms at the outermost part of a planetary magnetosphere, where the high-speed flow of the solar wind is suddenly slowed to subsonic speed by the planetary magnetic field. A similar boundary layer separates the heliosphere from interstellar space. Bow shocks also form around hot young stars where vigorous stellar winds slam into the surrounding interstellar medium.