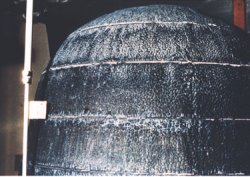 Charred ablative heat shield from the first KH-4 Corona mission. This heat shield was supposed to fall off after parachute deployment. Due to a malfunction, it stayed attached and was recovered, providing useful performance data. Credit: NASA.

A reentry vehicle is a space vehicle designed to return with its payload to Earth.

[This essay, by Dwayne A. Day, comes from the US Centennial of Flight Commission website]

Although various people, including Wernher von Braun and experts at Douglas Aircraft Company's Project RAND, had studied spaceflight during the 1940s, nobody began thinking about how a vehicle would actually return from space until the early 1950s. The few who did, like von Braun, realized that probably the best way to do it was to build a very big vehicle and circulate a fluid through its skin to soak up the heat of reentry. Von Braun envisioned astronauts returning from wheeled space stations in giant winged vehicles. When he thought about smaller spacecraft – for instance, those that would hold monkeys for a test program – he determined that there was no way that the heat could be absorbed without killing the occupants. Clearly the problem of reentry to Earth's atmosphere was a significant challenge for the early spaceflight researchers, as they considered how best to overcome the heat generated by friction as a spacecraft slowed in the atmosphere. While most proposals for satellites between 1946 and 1957 avoided the difficult problem of reentry, some researchers tackled the problem with determination.

However, not all reentry vehicles were spacecraft. Some vehicles had no choice but to scrape through the atmosphere – vehicles such as atomic warheads launched atop ballistic missiles. They would fly up in a cannonball arc above most of the atmosphere and then come screaming back through it at perhaps 20 times the speed of sound, heating up tremendously.

Early research on missile reentry vehicles during the 1950s focused upon long, needle-like designs. When tested in wind tunnels, so much heat was transferred to these vehicles that they burned up. Scientist H. Julian Allen at the Ames Aeronautical Laboratory of the National Advisory Committee for Aeronautics (NACA) made a rather counter-intuitive discovery in 1952: he found that by increasing the drag of the vehicle, he could reduce the heat it generated. Much of the heat of reentry was actually deflected away from the vehicle. The best designs were what Allen and another scientist, Alfred J. Eggers, called "blunt body" designs. Instead of needle-noses, they had blunt noses (flattened, as if smashed down with a hammer) that formed a thick shock wave ahead of the vehicle that both deflected the heat and slowed it more quickly, thereby protecting the vehicle.

Based upon this research, in 1955 General Electric (GE) engineers began work on the Mark 2 reentry vehicle for the Thor, Jupiter and Atlas missiles. The Mark 2 was a blunt body design. Much of the heat was deflected away from the vehicle via the shock wave. But some heat still reached the surface through the superheated plasma that formed in front of the vehicle. Getting rid of this excess heat was a problem. GE decided to use the heat-sink concept, whereby the heat of reentry was conducted from the surface of the vehicle to a mass of material that could soak it up quickly. The key was to conduct the heat away from the surface fast enough so that the surface material itself did not melt. GE's engineers tested several materials as heat-sinks, including beryllium, cast iron, and steel. But the best proved to be copper. By putting a big mass of copper just below the outer shell of the vehicle, they could prevent the craft from burning up.

The Mark 2 had what was called a low ballistic coefficient, or beta. The ballistic coefficient was a calculation of weight, drag and cross-section. Vehicles with a high beta – usually slender and smoother and with less drag – zipped through the upper atmosphere without decelerating much and did most of their slowing down in the thick lower atmosphere. They got very hot for brief periods of time. Vehicles with a low beta did most of their slowing down in the thin upper atmosphere. They took longer to slow down and generated less heat, but experienced this heat over a longer period of time.

General Electric's Mark 2 had a low beta. It was a flattened cone on its leading edge. It spent a lot of time in the upper atmosphere, trailing a stream of ionized gas that showed up dramatically on radar, which was not good for a warhead. Although this design was adequate, it was not ideal. What ballistic missile designers wanted was a vehicle that traveled as fast as possible through the atmosphere so that it could not be intercepted. In other words, they wanted a high beta vehicle. GE engineers doubted that heat-sink technology would work for a high beta vehicle. In addition, the heat-sink was heavy. All that copper took up valuable payload weight that could be used for other things, such as a bigger warhead. While it would work for a ballistic missile, it was not at all efficient.

The heat-sink's drawbacks became even more apparent when it was considered for a space vehicle. First, a space vehicle would reenter at a faster velocity than a ballistic missile and so it would get much hotter than the missile, requiring more copper, and perhaps other means of transferring the heat away from the surface. In addition, all that weight was prohibitive. Lofting it into orbit was harder than lobbing it at Moscow. Even worse, the extra weight had cascading effects. Not only would all that copper require more fuel to get it into orbit, but it would require more fuel to get it out of orbit. That extra fuel required to get it out of orbit only increased the initial fuel requirement even more.

But there was an even bigger problem. The heat-sink itself got hot, several hundred degrees hot. This was not a big problem for a nuclear bomb. But the kinds of things that would go into a space capsule, such as film for spy cameras or human beings, could not handle these temperatures.

By the mid-1950s, General Electric engineers were designing lightweight, medium-beta reentry vehicles for missile warheads. GE engineers evaluated several different concepts. One was transpirational cooling, which essentially boiled off a liquid, using the change from liquid to gas to take away the heat. Another was re-radiation, whereby the heat would be radiated away from the vehicle. Another proposal was liquid metal cooling, whereby a liquid metal, such as mercury, was circulated through the heat shield and conducted the heat away very efficiently. But the most promising proposal was a technique called ablation.

By 1956, some researchers were noticing that reinforced plastics had proven more resistant to heating than most other materials. They proposed using these plastics in the inlets of supersonic cruise missiles. GE engineers realized that they could use this same technique. They could coat the reentry vehicle with a material that absorbed heat, charred, and either flaked off or vaporized. As it did so, it took away the absorbed heat.

The ablation technique worked for both spacecraft and ballistic missile requirements, for low and high beta reentry vehicles. Ablation reduced temperatures. A blunt body, low beta reentry vehicle returning from space could keep the external temperature relatively low. Ablative material on the vehicle would lower this temperature even further. A streamlined, high beta missile warhead, however, would experience much higher heating for shorter periods of time. But ablation could also reduce this temperature as well, so that a missile warhead could reenter very fast and minimize its chance of interception, keeping cool by burning off layers of a special plastic.

The key was selecting the right material. Ultimately, they decided upon a phenolic resin plastic. They decided to use a nylon cloth impregnated with the phenolic resin and molded into the needed shape. Eventually, this and similar materials were used to coat the surfaces of nuclear missile warheads.

The first Mercury spacecraft used a blunt body design and a heat sink, but later versions used the blunt body design and an ablative surface. General Electric built an ablative, semi-blunt (slightly rounded) reentry vehicle for the Air Force and CIA Discoverer/Corona spacecraft, which returned film from spy satellites. Other companies, such as AVCO, also developed ablative reentry vehicles for missiles. Blunt body designs and improved ablative materials were also used on the Gemini and Apollo spacecraft, advancing rapidly during the 1960s. By the end of the decade, other technologies and techniques for surviving the furnace of atmospheric reentry were developed.