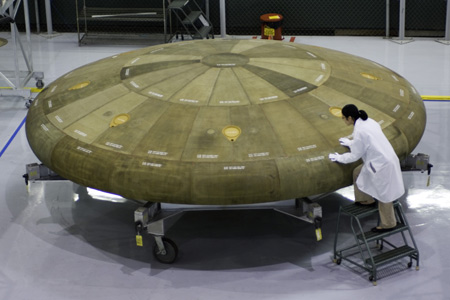 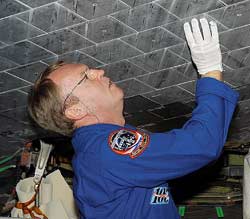 Reentry thermal protection is shielding that must be fitted to a spacecraft, such as a manned capsule or the Space Shuttle, if it is to survive the intense heat generated during reentry. The high heating experienced by a spacecraft when entering the atmosphere is caused by a high-pressure bow shock in front of the vehicle (not, as is sometimes supposed, friction with the air). This strong shock wave is caused by the craft flying at hypersonic speeds, or high supersonic speeds. Hypersonic means greater than Mach 5. The shock wave is where the atmosphere is rapidly compressed by a factor of 50 to 100, depending on the speed of the vehicle. Because of this rapid compression the gas is heated to temperatures of 6,000 K or more. This hot gas then impinges on the front of the spacecraft, transferring heat to the surface.

One way to dissipate this large amount of thermal energy is with a heat shield that works by ablation, that is by parts of it melting or vaporizing and breaking off in order to carry the heat harmlessly away. This technique was used by reentering Mercury, Gemini, and Apollo spacecraft. Early manned capsules, which were spherical in shape and not orientated in any special way for reentry, simply had an all-over ablative covering.

The Space Shuttle is fitted with a far more complex reentry thermal protection system that works by dissipating heat rather than ablation. This system includes ceramic tiles covering the underside and cockpit area, felt and ceramic blankets on the upper fuselage, and carbon-carbon composites along the wing leading edges and nosecone.

The Shuttle's thermal tiles come in three materials and two colors, are 2.5–7.5 cm thick, and cover most of the Orbiter's undercarriage and wings. All three materials are composites made mostly of silica fiber with various additives, heat-treated in a way similar to firing ceramics. They can be coated with either white or black glass. White tiles can be used in areas where the temperature does not exceed 650°C, black tiles where it does not exceed 1,260°C. Because the tiles are numbered and shaped individually to fit only at a certain places, their replacement is both difficult and time-consuming.

The leading edges of the Shuttle, which get hottest during reentry, are protected by panels made of reinforced carbon-carbon (RCC) that are fixed to the vessel's structural skeleton by floating joints to allow for differences in thermal expansion. The RCC panels can tolerate a maximum temperature of 1,630°C.

At the other end of the spectrum of sophistication, the Chinese have successfully used a very low-tech approach for protecting their SKW series of recoverable satellites – panels of oak.

Any windows on a manned spacecraft are located on the back surface, or leeward side, of the spacecraft during reentry. This side experiences lower high heat transfer compared with the windward side, and so it does not reach as high a temperature because the pressure is much lower – at least two orders of magnitude lower on the back side. The hot gas on the windward side expands to the leeward side, which means the pressure drops quickly, and so does the gas temperature. Even on the cooler leeward side windows must still be able to withstand temperatures as high as about 1,000°C. The Shuttle and Russian Soyuz capsules, for example, are made from a high-temperature quartz glass that can withstand heating and cooling without cracking. This same material will be used for windows on NASA's new Orion spacecraft.

It may not seem like the windows on the Space Shuttle are on the leeward side, but during the peak heating portion of reentry the nose of the Shuttle is pitched up from horizontal by 40 degrees. At this angle the pilots are not looking toward the direction that the spacecraft is moving, but more "up" towards space. Therefore the hot shock-heated gas bears only on the underbelly of the Shuttle where there are no windows, and not on the upper surface where the windows are. After the Shuttle passes through the hottest region of its flight it pitches down so that the pilots can see where they are flying by looking through the windows.

Back toward the trailing edges then, to a small escape-hatch beside which was fastened a dull black ball... He gasped as the air rushed out into near-vacuum... He rolled the ball out onto the hatch, where he opened it: two hinged hemispheres, each heavily padded with molded composition resembling sponge rubber...

...He curled up into one half of he ball; the other half closed over him and locked. The hatch opened. Ball and closely-prisoned man plummeted downward...

And as the ball bulleted downward on a screaming slant, it shrank!

...a synthetic which air-friction would erode away, molecule by molecule, so rapidly that no perceptible fragment of it would reach ground.

Phryges, still at an altitude of over thirty thousand feet, kicked away the remaining fragments of his cocoon... Low enough at last, he pulled the ripcord.

For details of the technological history of reentry thermal protection, see the article on reentry vehicles.