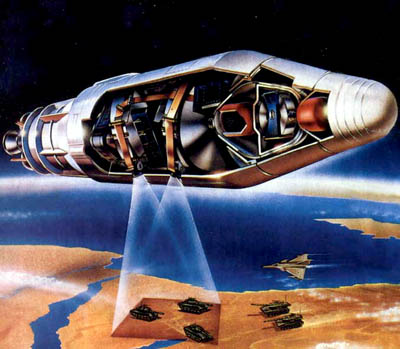 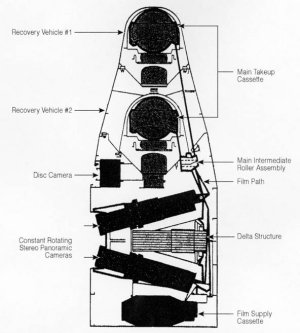 Corona was America's first series of photo-reconnaissance or IMINT (image intelligence) satellites, involving more than 100 launches between 1959 and 1972. The program had the cover name Discoverer and was only declassified in 1995. The Corona family is also known as Key Hole 1 through 4.

A Corona satellite would be placed in a polar orbit by a Thor-Agena rocket in order to take photographic swaths as it passed over the Soviet Union. It then collected its exposed film in a heat-resistant "bucket" at the nose, and the bucket would reenter over the Pacific Ocean, deploy two small parachutes, and be recovered in midair by an aircraft towing a trapeze-like snare. Bizarre as this sounds, the program proved successful after a shaky start – the first 12 launches failed and the thirteenth, though achieving orbit, did not carry a camera.

Discoverer 14 marked the program's first triumph. Its returning bucket was caught by a C-119 cargo plane on August 18, 1960 and provided the earliest photos of the Soviet Union's Plesetsk rocket base. In that single day, Corona yielded more valuable images of the Soviet Union than did the entire U-2 spy plane program. It proved conclusively that the Soviets' ICBM (intercontinental ballistic missile) arsenal did not number in the hundreds, as was widely feared, but rather amounted to somewhere between 25 and 50. This knowledge, however, was hidden from the American public for years. Corona showed that the supposed missile gap which Kennedy played upon in his presidential campaign was a myth – a fact he would have learned at the time had he taken up Eisenhower's offer of intelligence briefings.

Corona allowed the United States intelligence community to catalog Soviet air defense and antiballistic missile sites, nuclear weapons-related facilities and submarine bases along with military installations in China and Eastern Europe. It also provided pictures of the 1967 Arab-Israeli war and Soviet arms control compliance. Its retrieval system helped NASA develop a safe means of recovering manned spacecraft and its imaging systems provided the basis for the cameras carried by the Lunar Orbiters in 1966–67.

1. Day, Dwayne A. Eye in the Sky: The Story of the Corona Spy Satellites. Washington, D.C.: Smithsonian Institution Press, 1999.