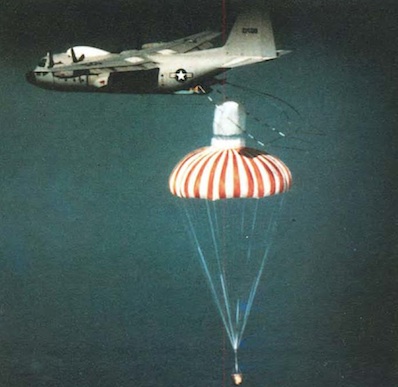 A US military aircraft retrieving a film capsule under parachute. 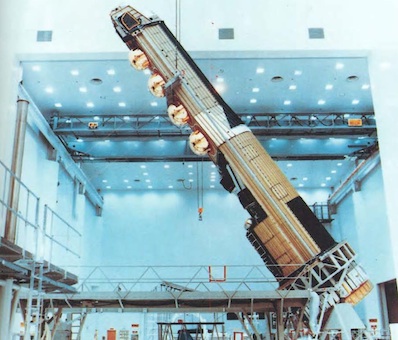 A KH-9 satellite being lifted for testing before launch. 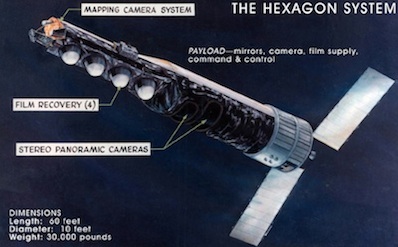 Key Hole (KH) is the name used by the National Reconnaissance Office (NRO) for various series of US PHOTINT military reconnaissance satellites. Missions in the Corona series, for example, were designated KH-1 to KH-4B. It was not until 1995 that information about these spacecraft was declassified. Argon missions were known as KH-5 and Lanyard as KH-6. In Sep 2011, NRO declassified information about the KH-7, -8, and -9 (see below). With the first of the KH-11 launches, in 1976, came a switch from conventional photography to electro-optical imaging in which digital image files were stored onboard the spacecraft and then relayed to ground stations for analysis. These later programs remain classified.

The KH-7 program enabled sharper imagery than ever before of Soviet missile bases, airfields, and strategic sites to be captured. Between Jul 1963 to Jun 1967, NRO launched 38 KH-7 payloads, 28 of which it deemed to be successful. Each satellite carried a camera, developed by Eastman Kodak, with a focal length of 77 inches, which, from an altitude of 60 NM, could resolve detail on the ground as small as about 3 ft across. Each carried a single reentry capsule, limiting their mission to about one week once all the film was used up. The film capsule descended by parachute and was collected in mid-air by a specially-equipped military aircraft.

KH-8 (Gambit 3) satellites carried two film recovery capsules and an upgraded Eastman Kodak camera with twice the focal length as of the KH-7 camera. From 1966 to 1986, 54 KH-8 payloads were launched, dropping film back to Earth twice each mission. The superior camera allowed the KH-8 satellites to spot features smaller than 2 ft on the ground.

Both KH-7 and -8 series required an Agena D upper stage for maneuvers and attitude control in orbit.

KH-9 satellites, each 60-ft long (roughly the size of a school bus) and weighing 30,000 lb, could spend up to 9 mo in orbit taking photos with a high-resolution imaging camera or a wider angle mapping camera for context imagery. With four recoverable film buckets, the KH-9 series could send home packets of imagery every couple of months. One frame would cover a sliver of the Earth covering a distance equal to that from Washington DC to Cincinnati, Ohio. Each satellite carried 60 miles of film that moved through a pressurized path up to 16 ft/s during imaging operations. In total NRO launched 20 KH-9 satellites, the only major failure being a catastrophic rocket explosion nine seconds after liftoff on the final mission in 1986.