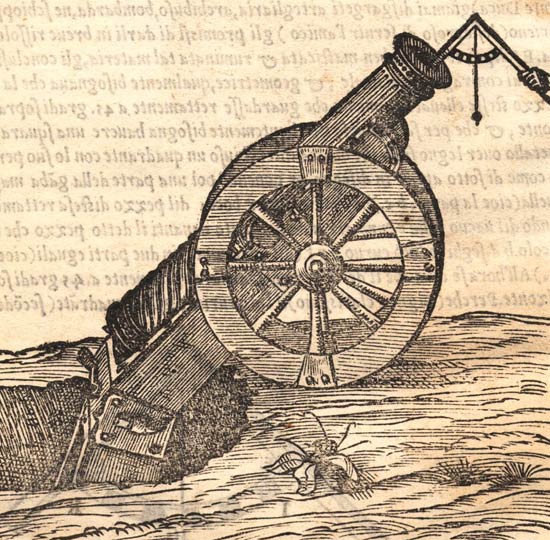 Cannon elevated at 45 degrees above the horizon using the artillerist's quadrant.

Ballistics is the study of the dynamics of an object, or projectile, moving solely under the influence of a gravitational field. It is traditionally divided into three parts.

Interior ballistics is concerned with the progress of the projectile before it is released from the launching device. In the case of a gun this involves determining the propellant charge, barrel design, and firing mechanism needed to give the desired muzzle velocity and stabilizing spin to the projectile.

External ballistics is concerned with the free flight of the projectile. At the beginning of the seventeenth century Galileo determined that the trajectory (flight path) of a projectile should be parabolic, as indeed it would be if the effects of air resistance, the rotation and curvature of the Earth, the variation of air density and gravity with height, and the rotational inertia of the projectile could be ignored. The shock waves accompanying projectiles moving faster than the speed of sound are also the concern of this branch.

Aeroballistics is the study of the motion of bodies whose flight path is determined by applying the principles of both aerodynamics and ballistics to different portions of the path.

Terminal or penetration ballistics deals with the behavior of projectiles on impacting at the end of their trajectory. The velocity-to-mass ratio of the impact particle is an important factor and results are of equal interest to the designers of ammunition and or armor plate. A relatively recent development in the science is forensic ballistics, which plays an important role in the investigation of gun crimes.

The ballistic coefficient is a measure of a projectile's ability to coast. It is defined as Cb = M/Cd A where M is the projectile's mass and Cd A is the drag form factor. At any given velocity and air density, the deceleration of a rocket from drag is inversely proportional to this value. Intuitively, it is the principle behind why a tightly crumpled piece of paper can be thrown farther than a loosely crumpled one.