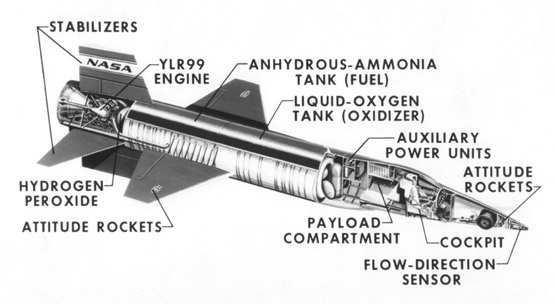 The X-15 was an experimental rocket plane, built by North American Aviation, that set aircraft speed and altitude records, some of which still stand today. First flown on June 8, 1959, it was used to provide data on thermal heating, control, and stability at extremely high speeds, and on atmospheric reentry. It was made primarily from titanium and stainless steel covered with Inconel X nickel, an alloy that can withstand temperatures up to 650°C. To sustain even higher temperatures the X-15 was often covered with a pink ablative material (MA-25S) which could boil away, carrying the heat with it.

The plane was dropped from a B-52 bomber at an altitude of 13,700 m, and then ignited its Reaction Motors XLR99-RM-2 throttleable liquid propellant (liquid hydrogen and anhydrous ammonia) engine. The rear tail was movable and could be pivoted for control at altitudes where the air was sufficiently thick. At greater (non-atmospheric) heights, control was provided by 12 hydrogen peroxide jets – four in the wingtips and eight in the nose. The plane was piloted following a predetermined flight path, and came down on Rogers dry lakebed using unique landing gear. Just before landing, the lower half of the bottom tail section was jettisoned, and two landing skids deployed, together with a two-wheel conventional landing gear at the nose.

Three X-15s were built and 199 missions flown, the last in November 1968. During the X-15 program, 13 flights met the US criterion for a spaceflight by passing an altitude of 50 miles (80 km) and the pilots were accordingly awarded astronaut status by the US Air Force. Out of these, two also qualified for the international FAI definition of a spaceflight by exceeding an altitude of 100 km (62.1 miles). The X-15 was the first aircraft to exceed Mach 4, 5, and 6 – records that it broke successively within a nine-month period in 1961 with US Air Force Robert White at the controls.


At the edge of space

Of all the dozens of other X planes that have been built – and continue to be built – only one, the X-15, has achieved a similar, legendary status to the X-1. It too was a rocket-plane but instead of peaking out at two and a half times the speed of sound, it eventually reached more than Mach 6 and flew so high that for minutes at a stretch, on some missions, it was not an aircraft but a spacecraft plunging through the near-airless void 50 or 60 miles above the ground. Thirteen flights of the X-15 by eight different pilots met the Air Force's criterion for a spaceflight and earned their pilots the right to be called astronauts.

The X-15 was a collaborative project between the US Air Force and Navy, and NASA. With an airframe built by North American Aviation and an engine supplied by Reaction Motors, the 50-ft-long plane was the first to be designed specifically to cope with the unusual demands of hypersonic speeds – those above about Mach 5.5. The wedge-shaped tail surfaces were to give directional stability at speeds where airfoils of a more conventional shape wouldn't have been effective. The large upper and lower fins and the downward slant of the stubby wings were intended to keep the aircraft stable during steep climbs and at high altitudes.

Stability was only one of the big challenges of hypersonic flight. Another was overheating caused by friction with the high-speed air. Designers knew that some parts of the plane, like the nose and wing edges, would reach temperatures above 650°C. So they needed a metal that would maintain its strength when this hot. In the end they chose titanium with a covering of an incredibly tough, heat-resistant, nickel-chromium alloy called Inconel X.

Like the X-1, the X-15 was carried up by a mothership, a giant B-52 bomber, to an altitude of 40,000 ft. After being released, its powerful rocket engine fired for about 85 s, burning up to 15,000 lb of fuel in that time, and pushing the plane and its pilot to accelerations of as much as 4g. From drop to landing, an entire flight would last about 12 min.

Among those who flew the X-15 was Neil Armstrong, the first man on the Moon. Less well known is Joseph Walker, a NASA test pilot who can claim another remarkable record – the first man to fly into space on two different occasions.

A veteran of World War II, Walker had been raised on a farm in Pennsylvania and showed an engineering talent and a thirst for knowledge early on. After the War, he joined NACA's Aircraft Engine Research Lab in Cleveland, Ohio, as an experimental physicist, and later became a test pilot at the Edwards Flight Research Facility (now Dryden FRC) alongside Edwards Air Force Base. There he flew a variety of experimental aircraft, including the X-1 and its variants, and later X-planes.

In 1958, Walker was picked to take part in the Air Force's Man In Space Soonest program, aimed at putting an American in space before the Soviet Union. The program was cancelled after a few months and replaced by NASA's Project Mercury. Only two men from the Man In Space Soonest program would go on to reach space – Neil Armstrong and Walker. These two were also among the select few to pilot the Lunar Landing Research Vehicle (LLRV), a notoriously hard-to-fly contraption used to simulate the descent of the Apollo Lunar Module onto the surface of the Moon. Walker was the first to lift off in the LLRV, on October 30, 1964, taking it for three flights lasting a total of just under a minute to a peak altitude of 10 ft.

In 1960, Walker became the first NASA pilot to fly the X-15, and the second X-15 pilot of all, following Scott Crossfield who ran initial tests on behalf of the manufacturer, North American Aviation. On his maiden outing in the X-15, Walker was shocked by the plane's brutal acceleration. Having just ignited the engine he was crushed back into his seat, yelling "Oh, my God!", to which the flight controller calmly replied "Yes? You called?"

Walker went on to fly the X-15 a couple of dozen times – twice in succession in 1963 to heights of more than 62 miles (100 km), which in the eyes of both the US Air Force and Fédération Aéronautique Internationale (FAI) counts as the edge of space. On July 19, he peaked out at 65.8 miles (105.9 km), and a month later bettered that by going to 67 miles (107.8 km), travelling over 3,700 mph on both occasions. The first of these flights made Walker the first US civilian in space and the second civilian astronaut in history after the Soviet Union's Valentina Tereshkova (who wasn't in the military at the time of her trip into orbit); the second made him the first person to go into space twice (according to Air Force and FAI rules). No manned plane would beat Walker's X-15 record altitude until Virgin Galactic's SpaceShipOne soared to over 69 miles in 2004.

On June 8, 1966, Walker was flying an F-104 Starfighter in tight formation with other high-performance planes for an Air Force publicity photo. He was trying to maintain position just below, and 70 ft to the side of, an XB-70 Valkyrie prototype bomber. At some point he misjudged where he was, and may also have flown into the wake vortex of the other plane. In any event, his Starfighter drifted too close to the XB-70's right wingtip, made contact with it, and flipped over. Rolling inverted, the F-104 passed over the top of the bomber, smashed into its vertical stabilizers, and exploded, killing Walker instantly.