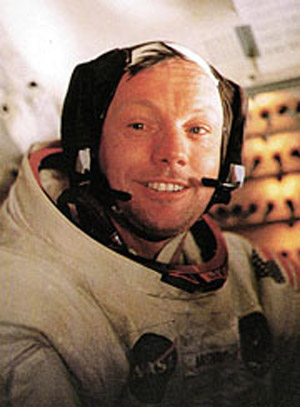 Neil Armstrong was an American astronaut and the first human to set foot upon the Moon. Born in Wapakoneta, Ohio, Armstrong received a BS in aeronautical engineering from Purdue University and an MS from the University of Southern California. He entered the Navy and flew as a naval aviator from 1949 to 1952. In 1955 he joined NACA's (National Advisory Committee for Aviation's) Lewis Flight Propulsion Laboratory and later transferred to the High Speed Flight Station at Edwards Air Force Base as a civilian aeronautical test research pilot for NACA and NASA. Among the aircraft he tested was the X-15 rocket plane.1 He became an astronaut in 1962 and subsequently commanded the Gemini 8 and Apollo 11 missions. On May 6, 1968, he had a narrow escape when the Lunar Landing Research Vehicle he was flying went out of control and he was forced to eject; he landed by parachute and walked away uninjured.

Upon returning from the Moon, Armstrong served as deputy associate administrator for the office of Advanced Research and Technology at NASA Headquarters. In 1971, he left NASA to become a professor of aeronautical engineering at the University of Cincinnati where he taught until 1981. He subsequently entered the business world and served as chairman of CTA, Inc. He was also a popular motivational speaker.

He died on August 25, 2012, following complications resulting from surgery, earlier in the month, to treat blocked coronary arteries.