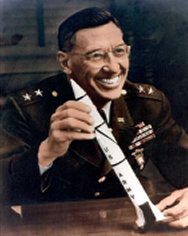 Holger Toftoy was a career United States Army officer and an expert in ordnance, who was responsible for bringing the German rocket team under the leadership of Wernher von Braun to America in 1945. The idea for the Bumper-WAC was his. Toftoy became commander of the Redstone Arsenal, Huntsville, in 1954 and worked closely with von Braun's teams in the development of the Redstone and Jupiter missiles. In the aftermath of Sputnik 1 in 1957, he persuaded the Department of Defense to allow the launch of America's first Earth-orbiting satellite aboard the Jupiter missile with the result that Explorer 1 was placed in orbit on 31 January 1958. He also held a number of other positions in the Army, including head of the Rocket Research Branch of the Chief of Ordnance in Washington, DC, and commander of the Aberdeen Proving Ground in Maryland. He retired from the Army in 1960 with the rank of major general.