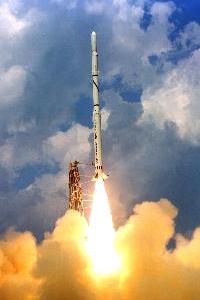 Scout was a small rocket, 21.9 m high and 1 m in diameter, able to launch lightweight satellites or perform high-altitude research at relatively low cost. Conceived by NACA (National Advisory Committee on Aeronautics) in 1958, the Scout program was taken over by the Langley Research Center when NASA was created in October 1958. In less than a year, Scout emerged as a four-stage vehicle that could serve as a sounding rocket or small satellite launcher. NASA decided that all four stages would be solid-fueled, citing the relative simplicity and reliability of previously demonstrated solid-fuel technology.

The Scout first stage, called Algor, was adapted from the Polaris missile program. Controlled by the moveable outer tips of four stabilizer fins in conjunction with four exhaust deflector vanes, it burned for 40 sec and could produce a thrust of 510,000 newtons (N). The second stage also had its roots in a military program. Called Castor, it originated with the Army Sergeant rocket program. It burned for 39 seconds, was stabilized by hydrogen peroxide jets, and could produce a thrust of 225,000 N. The third stage, Antares, was an upgraded version of the Vanguard Altair third stage. It burned for 39 sec was stabilized by hydrogen peroxide jets, and could produce 61,000 N of thrust. An actual Vanguard Altair third stage was incorporated as the Scout's fourth stage. This burned for 38 sec, was spin-stabilized, and could produce a thrust of 13,700 N. Both the third and fourth stages were encased in a glass-fiber shield which included the payload shroud and a device to spin-stabilize the fourth stage. The Scout was able to carry a 23-kg payload on a ballistic trajectory to an altitude of 13,700 km or a 68-kg payload into LEO.