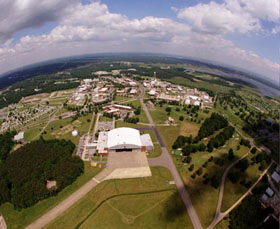 Langley Research Center is NASA's oldest primary field installation, named after aviation pioneer Samuel Langley. The mission of Langley research center is to carry out broad scale research on vehicle configurations, materials, and structures for space, and aeronautics. Established in 1917 and formerly known as Langley Aeronautical Laboratory, it is located at Langley Field, Hampton, Virginia. During World War II it was involved in developing military aircraft and then in programs which led to the first supersonic plane, the Bell X-1.

Staff from Langley formed the Space Task Group that was responsible for the Mercury Project, before this program was transferred to the Manned Spacecraft Center at Houston. Langley was also involved in investigating the optimum shape for Gemini and Apollo spacecraft so that they could survive reentry. Among its other projects have been the Echo balloons, the Pegasus micrometeoroid detection satellites, Lunar Orbiter, and developing the Mars Viking mission.