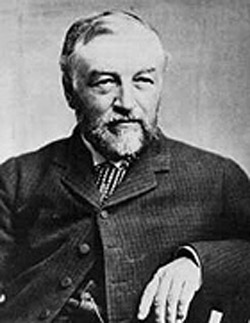 Samuel Langley was an American astronomer, physicist, and aeronautics pioneer who built the first heavier-than-air flying machine to achieve sustained flight; NASA's Langley Research Center is named after him. Born in Roxbury, Massachusetts, Langley was educated in the Boston public schools but taught himself astronomy and engineering as a young adult. In 1866, after working as an assistant astronomer at Harvard College Observatory for a year or so, he took on an astronomer position at the US Naval Academy. However he chose to move on again the next year, to become director of the then newly endowed Allegheny Observatory of the Western University of Pennsylvania. In 1887 he left Allegheny Observatory (in much better shape than he found it) to become assistant secretary of the Smithsonian Institution in Washington DC, where he successfully pushed for the founding of what is now known as the Smithsonian Astrophysical Observatory, of which Langley became director in 1890.

Today Langley is best remembered in astronomy for his pioneering work on the measurement of the solar constant, and equally pioneering studies of the infrared portion of the solar spectrum. By 1880 Langley has perfected his bolometer. This instrument was based on a then already well-known property of metals, namely the fact that their electrical resistivity is a sensitive function of temperature. Langley's bolometer was so sensitive that it could detect thermal radiation from a cow a quarter of a mile away. His first "map" of the infrared portion of the solar spectrum was published in 1894. In 1895, badly in need of additional manpower due to ever increasing administrative duties, Langley hired Charles Greeley Abbot (1872–1973), then a 23-year-old graduate student at the Massachusetts Institute of Technology. Abbot became equally fascinated with the solar constant problem, and carried out Langley's program with flying colors for the following half century.

In 1888 Langley published a beautifully written popular science book entitled The New Astronomy, with a strong emphasis on recent developments in solar physics, which gained a very broad readership and did much to popularize the rising science of astrophysics.

It was during his tenure at the Smithsonian Institution that Langley carried out most of his experiments in heavier-than-air flight. He began his experiments with flying machines that used twisted rubber bands for propulsion. His larger models used steam engines. He had two successful flights in 1896 with models that caught the eye of the US War Department. After receiving financial support from the War Department, he built a full-size flying machine called an Aerodrome that was to be piloted. This vehicle used a gasoline-powered internal combustion engine that was built by Charles Manley and was based on an engine built and tested in 1901 by Stephen Balzer. Unfortunately, Langley devoted too much time to the subject of propulsion and not enough to considering the added stresses that would be placed on a large vehicle that was to carry a human passenger. Twice in 1903 he attempted to launch the Aerodrome by catapulting it from the roof of a houseboat anchored in the Potomac River but both attempts failed when the aircraft fell apart and plunged into the Potomac. In the aftermath, Langley was severely criticized by the press and Congress for wasting public money and he abandoned the effort.

Langley was a member of the US National Academy of Sciences, and was for a time president of the American Association for the Advancement of Science. In 1886 he was awarded both the Rumford Medal by the Royal Society of London, and the Draper Medal of the National Academy of Sciences, and in 1893 the Janssen Prize of the Paris Academy. In 1905 Langley suffered a stroke that left him partly paralyzed and in the care of his sister. He died of a second stroke in February 1906.