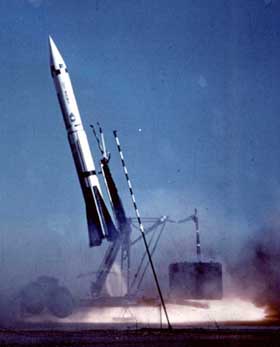 Sergeant was a US Army single-stage, surface-to-surface ballistic missile designed to replace the Corporal. First deployed in Sep§tember 1962, the Sergeant was powered by a solid-fueled motor. Although designed as a weapon capable of delivering a conventional or nuclear warhead, it played a significant part in the early American space program. The second stage of the Jupiter C, which launched America's first satellite, was a ring of 11 scaled-down Sergeant motors (called Baby Sergeants) encased in a metal cylinder, while the third stage was powered by three more Sergeants.