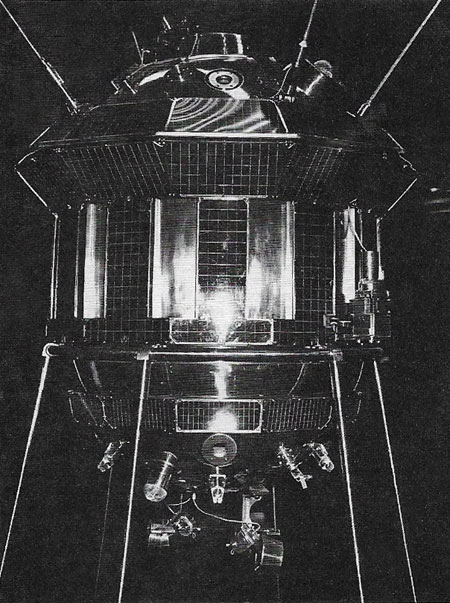 Luna 3 was the first space probe to give a glimpse of the far side of the Moon. Because Earth's gravity has 'captured' the Moon's rotation so that it always faces us, we can only ever see half of its surface. Some astronomers in the 19th century speculated that the Moon's center of gravity might be displaced toward the far side, thus making it possible for an atmosphere to have developed there. This strange theory was never taken seriously but it was certainly true that there was n positive information available about 41% of the lunar sphere which is never visible from Earth. In 1959, these speculations were finally and completely disproved. Launched on 4 Oct 1959, Lunar 3 was the first lunar probe to carry a camera. For a period of 40 min it photographed the Moon's hidden face revealing an even more barren and cratered surface than the near side.

Luna was a series of Soviet Moon probes, including orbiters, landers, and sample-return craft, launched between 1959 and 1976. Lunas were the first man-made objects to reach escape velocity, crash into the Moon, photograph the Moon's farside, soft land on the Moon, automatically return lunar surface material to Earth, and deploy a rover on the Moon's surface.

Following the success of the first three Lunas (known in the West as 'Luniks'), was a gap of three and a half years while the Soviets developed a more sophisticated strategy for lunar exploration. This involved placing a probe in a temporary parking orbit around Earth before firing a rocket to put the craft on a lunar trajectory – in principle, a more accurate method than direct ascent (that is, shooting straight at the Moon from the ground). However Lunas 4 through 8 all failed, for various reasons, in their attempts to soft-land. Success came again with Luna 9, the first spacecraft to send back photos from the lunar surface. Lunas 10-12 and 14 were orbiters, designed in part to provide detailed photographic maps and collect other data that were essential to the Soviet manned lunar program.

Then came a sudden shift in emphasis. With the Moon Race lost to the Americans, the Soviets began launching much larger Lunas – three times more massive than the earlier craft-requiring the more powerful but less reliable Proton rocket. Several of the new generation of Lunas (though not officially named as such) were left stranded in Earth orbit before Luna 15 was successfully placed on a lunar trajectory just two days ahead of Apollo 11. Its audacious mission, to upstage Apollo 11, ended when it crashed on Jul 21 just as Armstrong and Aldrin were preparing to leave the Moon. Subsequent heavy Luna's, however, were for the most part highly successful, returning several samples along with other valuable data and delivering the first automated rovers to explore another world.

The first man-made object to reach escape velocity; it was supposed to hit the Moon but a failure of the launch vehicle's control system caused it to miss by about 6,000 km. En route the probe released a cloud of sodium gas (as did Luna 2), the glowing orange trail of which allowed astronomers to track the progress of the spacecraft visually. Luna 1, also known as Mechta (Dream), measured the strength of the solar wind and showed that the Moon had no magnetic field. The spacecraft contained radio equipment, a tracking transmitter, and telemetry system, five different sets of scientific devices for studying interplanetary space, including a magnetometer, Geiger counter, scintillation counter, and micrometeorite detector, and other equipment.

The first probe to hit the Moon. Luna 2 was similar in design to Luna 1, a spherical spacecraft with protruding antennae and instrument parts. The instrumentation was also similar, including scintillation- and Geiger- counters, a magnetometer, and micrometeorite detectors. On impact, east of the Sea of Serenity, it scattered a number of Soviet emblems and ribbons across the surface. About 30 min later, the final stage of Luna 2's booster rocket made its own fresh crater.

Luna 3 was the first probe to return images of the far side of the Moon. It was launched on a figure-eight trajectory bringing it within 6,200 km of the Moon and around the farside, which was sunlit at the time. The 17 indistinct pictures received from the spacecraft showed the farside to be mountainous with two dark regions which were subsequently named Mare Moscovrae (Sea of Moscow) and Mare Desiderii (Sea of Dreams). (Mare Desiderii was later found to be composed of a smaller mare, Mare Ingenii [Sea of Ingenuity] and other dark craters.)

The first Lunas to be placed in low Earth parking orbit prior to lunar trajectory insertion. All were attempted soft-landings and all failed because of faulty rocket firings in Earth orbit, in midcourse, or during descent to the lunar surface.

The first successful lunar soft-lander. The landing capsule was a 100-kg sphere which was dropped roughly on to the Ocean of Storms by a cylindrical mother craft which carried the main braking rocket and fell to destruction after its work was done. Once the lander had rolled to a stop, four petal-like covers opened and four radio antennas extended, allowing Luna 9 to remain in contact with Earth for the next three days. Its TV camera sent back images which, when pieced together, provided a panoramic view of the surface, including views of nearby rocks and of the horizon 1.4 km away.

Lunar orbiter missions that returned photographs, and took measurements of infrared, X-ray, and gamma emission from the Moon (to determine chemical composition), on-orbit radiation conditions, micrometeorite collisions, and variations in the lunar gravitational field caused by mass concentrations, or "mascons." They typically functioned for several months.

Soft-lander, similar to Luna 9, which arrived on the Ocean of Storms on Christmas Eve, 1966. In addition to a camera that sent back photographic panoramas under different lighting conditions, Luna 13 was equipped with two spring-loaded arms. One of these was used to determine the density of the surface by measuring the effect of the landing capsule's impact on the soil – a piece of information crucial to the designers of a manned mission. The other arm probed the chemical composition of the surface.

Automated lunar sample-return craft, three of which were successful. Luna 15 entered lunar orbit two days ahead of Apollo 11, and on the day Apollo 11 began circling the Moon lowered its own orbit to 9 by 203 km. At this point there was concern in the United States that the Russian probe would somehow interfere with the manned mission. However, assurances were quickly given by the Soviets that this would not be the case. On July 20, just hours before Apollo 11's scheduled landing, Luna 15 carried out another maneuver to put it in a 16- by 110-km orbit. The next day, while Armstrong and Aldrin were on the surface, the little probe made its last retrorocket burn and began to descend to what was supposed to be a soft landing. Unfortunately, it made contact instead at 480 km/h in the Sea of Crises. Almost twenty years would pass before the Soviets officially admitted that Luna 15 was a failed sample-return attempt. Whether, if all had gone well, it could have beaten Apollo 11 is unclear. Even if its landing attempt had succeeded, it would not have returned to Earth until the day after Apollo 11 splashed down. On the other hand, Lunar 15 did spend one day longer in lunar orbit than was typical of later sample missions. If the probe had made it down in three days instead of four, or if Apollo 11 had failed to return samples, the Soviets might just have pulled off an outrageous coup.

Luna 16 landed safely on the Moon on Sep 20, 1970 on the Sea of Fertility and deployed an extendable arm with a drilling rig to collect 100 g of soil and rock. After 26 h 25 min on the surface, the ascent stage, with a hermetically sealed soil sample container, took off and returned to Russia on Sep 24. The lower stage remained on the lunar surface and continued sending back on temperature and radiation.

Luna 18 used a new method of navigation in lunar orbit and for landing. However, after 54 lunar orbits, it failed as it descended toward the Sea of Fertility on September 11, 1971 and crashed into mountainous terrain. On Feb 21, 1972, Luna 20 soft-landed in the Apollonius highlands, just 120 km from where Luna 18 had come down, collected 30 g of samples and returned to Earth four days later.

A similar scenario played out with Lunas 23 and 24. The former actually survived its landing on the Sea of Crises but was sufficiently battered that its sample-collecting apparatus was knocked out of action. However its successor, the final Luna mission, touched down just a few hundred meters away and returned triumphantly with 170 g of Moon rock.

Soft-landers carrying Lunokhod automated rovers. Luna 17 entered lunar orbit on Nov 15, 1970 and landed two days later on the Sea of Rains. Having taken pictures of its surroundings, Lunokhod 1 then rolled down a ramp and began exploring the surface. The rover would run during the lunar day, stopping occasionally to recharge its batteries via the solar panels. At night it would hibernate until the next sunrise, kept warm by the radioactive source. Although intended to operate through three lunar days (earth months) the rover actually operated for eleven, officially ending its mission on Oct 4, 1971, the anniversary of Sputnik 1. By then it had traveled 10.5 km, transmitted more than 20,000 TV pictures and 200 TV panoramas, and conducted more than 500 soil tests.

On Jan 15, 1973, Luna 21 touched down in LeMonnier crater on the Sea of Serenity with Lunokhod 2 aboard. Over an operating period of four months, this second rover covered 37 km, including hilly upland areas and rilles, sent back over 80,000 TV pictures and 86 panoramic images, and carried out a variety of experiments including mechanical tests of the surface and laser ranging.

Heavy lunar orbiters that continued mapping the Moon's surface and extended earlier studies of the lunar gravitational field and the location of mascons, the on-orbit radiation environment, the gamma-active lunar surface, micrometeoroids, and the solar wind. Luna 22's orbit was eventually adjusted so that its perilune was as low as 25 kilometers.