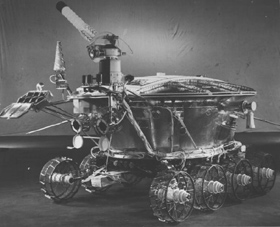 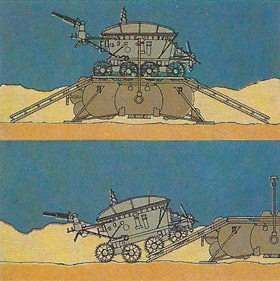 Each Lunokhod was taken to the Moon by a Luna spacecraft; after landing it was sent down a ramp to the surface.

Lunokhod 1 and 2 were two automated lunar rovers, launched by the former Soviet Union as part of the Luna program to explore the Moon. The eight-wheeled vehicles carried television cameras and instruments to analyze the Moon's soil, and were guided over the lunar surface by remote control from Earth.

Lunokhod 1 was delivered to the Sea of Rains by the Luna 17 soft-lander in Nov 1970. The 2.2-m (7.25-ft) long vehicle rolled out of the lander on eight wheels and began to transmit TV pictures of its surroundings. Other instruments on board detected cosmic rays, analyzed the physical and chemical composition of the lunar rocks, and bounced laser beams back to Earth so that scientists could determine the precise Earth-Moon distance. Lunokhod 1 covered a distance of 10.5 km by the end of its mission 11 months later.

Lunokhod 2, an improved version with twice the top speed, landed aboard Luna 21 in Jan 1973 in the partially ruined crater Le Monnier on the edge of the Sea of Serenity, and covered a total of 37 km (23 mi) in its five-month lifetime. It operated near the landing site of Apollo 17.

Lunokhod 2 and its mothership Luna 21 were sold in 1993 for $68,500 at a Sotheby's auction – even though both spacecraft are now lifeless on the Moon's surface!