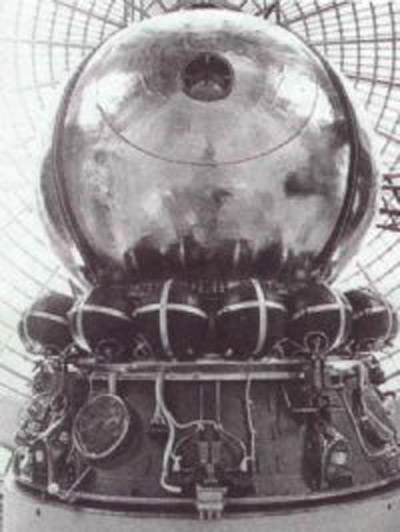 Voskhod was a multiseater Soviet spacecraft hurriedly adapted from Vostok in order to upstage the two-man American Gemini program. Only two Voskhod ("sunrise") flights were made. On the first, three seats were squeezed into a converted Vostok, giving their occupants no room to wear spacesuits – a life-threatening gamble in order to mount the first three-man mission. (A similar gamble during the early Soyuz program ended with the death of a crew after the cabin depressurized.) The Voskhod 1 cosmonauts, who included Konstantin Feoktistov and Boris Yegorov, the first scientist and physician in space, respectively, and Vladimir Komarov, spent a day in orbit five months before the first Gemini mission. Feoktistov earned his berth through having figured prominently in the design of Vostok, and its transformation into Voskhod.

The two-man Voskhod 2 achieved another on-orbit spectacular when Alexei Leonov carried out the first spacewalk. To enable this, Soviet engineers had designed an airlock which could be inflated in orbit to form a tunnel for exiting and reentering without having to let the air out of the cabin. (By contrast, American capsules of this era had to be completely depressurized prior to EVAs.) However, during Leonov's 24-min spacewalk, his suit ballooned up more than expected, and became too large and rigid to fit back through the airlock. Leonov was compelled to vent some of the suit's air. Once he managed to get back inside, the main hatch refused to seal properly, causing the environmental control system to compensate by flooding the cabin with oxygen and creating a serious fire hazard in a craft only qualified for a sea-level nitrogen-oxygen mixture. More dangers were to follow. When the time came for reentry, the primary retrorockets failed, forcing a manually-controlled retrofire one orbit later. Then the service module failed to separate completely, leading to wild gyrations of the joined reentry sphere and service module before connecting wires burned through. Voskhod 2 finally landed, about 2,000 km off course, in heavy forest in the Ural mountains. The crew spent an uncomfortable night in the woods, surrounded by wolves, before being located.