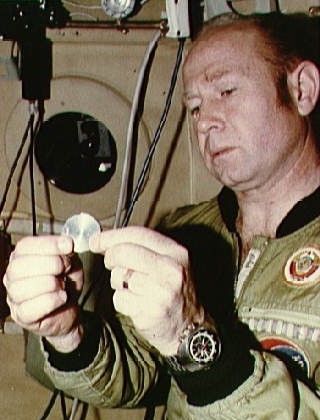 Alexei Leonov was a Soviet cosmonaut who, on 18 March 1965, during the flight of Voskhod 2, became the first person to go on a spacewalk. He also served as the Soviet capsule commander during the Apollo-Soyuz Test Project (ASTP).

Leonov graduated with honors from Chuguyev Higher Air Force School in 1957, then joined the Soviet Air Force as a fighter pilot before being selected as one of the original group of 20 cosmonauts on 7 March 1960. Following the Voskhod 2 mission, he attended the Zhukovsky Air Force Engineering Academy, graduating in 1968. For various reasons, his return to space was much delayed. He was assigned to the secret manned Soviet lunar project, but this was canceled. Later he was put on the flight crew of Soyuz 11 but, a few days before launch, another crewmember became ill, and the backup crew was sent instead. All three backup crewmembers died due to a malfunction during reentry. As a result, the flight that Leonov had been reassigned to, Soyuz 12a, was canceled. His next scheduled flight, aboard Soyuz 12b, was also canceled because of the in-orbit failure of Cosmos 557. Finally, Leonov returned to space as commander of Soyuz 19 on the ASTP. While in orbit, he made sketches, including one of the American astronaut Thomas Stafford, using a set of colored pencils attached to his wrist with a makeshift bracelet. Leonov was subsequently promoted to major-general. Later he became deputy director of the Gagarin Cosmonaut Training Center and then chief of the Center's International Detachment, training guest cosmonauts for space travel.