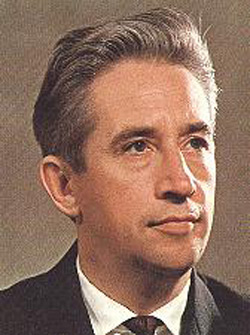 Konstantin Feoktistov was a Soviet spacecraft design engineer and first civilian cosmonaut. Together with Sergei Korolev, Feoktistov began conceptualizing a manned space vehicle that could travel into orbit and return safely to Earth as early as June 1956. He helped design the Vostok spacecraft and its subsequent conversion to the multiseater Voskhod. For this he was rewarded with dubious pleasure of flying alongside two crew mates in the extremely risky Voskhod 1 mission in 1964, thus becoming the first scientist-engineer in space. As head of his own bureau he played a major role in the design of the civilian Salyut and Mir space stations and served as flight director on the Soyuz 18/Salyut mission in 1975. Although assigned to fly on Soyuz T3, he was grounded a few days before launch because of medical problems. Later he joined NPO Energia before retiring in 1990.

Feoktistov was born in Voronezh, graduated from E. N. Bauman Moscow Higher Technical School (MVTU) with a doctorate in physics, and was wounded while serving in intelligence in World War II. A crater on the Moon is named after him.