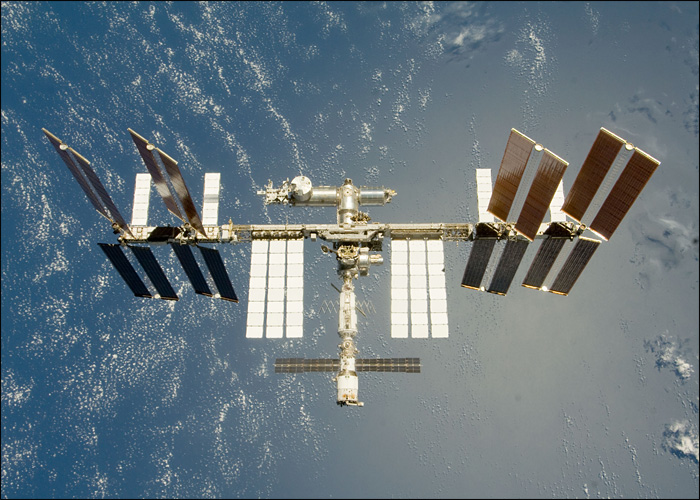 The International Space Station photographed from the space shuttle Endeavour during its mission to the orbiting outpost in Jul 2009. The combined shuttle and ISS crews set a new record of 13 people on the station. 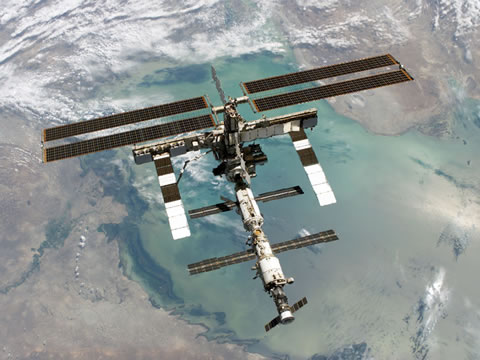 The ISS photographed from the shuttle Discovery in 2006.

ISS configuration as of December 2007.

Size comparison of the ISS and a Boeing 747.

Size comparison of the ISS and a football field. 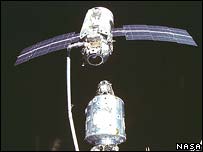 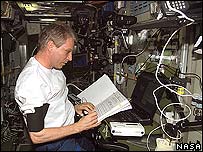 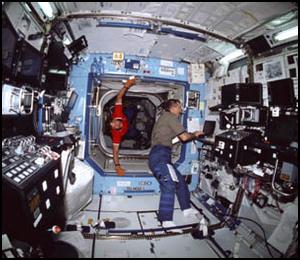 Inside the Destiny lab.

The International Space Station (ISS) is the largest space station ever built, the largest structure ever assembled in space, and one of the most complex international scientific projects in history. Now essentially complete, the ISS is more than four times larger than the old Soviet Mir space station and longer than an American football field (including the end-zones). It has a pressurized living and working space approximately equivalent to the volume of a 747 jumbo-jet or a conventional five-bedroom house, and can accommodate up to seven astronauts. It has a gymnasium, two bathrooms, and a bay window. The solar panels, spanning more than half an acre, supply 84 kilowatts – 60 times more electrical power than that available to Mir. The ISS has been continuously occupied since November 2, 2000, and is visible, at times, in the night sky to the naked eye. It will continue in operation until at least 2015, and possibly as late as 2020.

The orbit of ISS, with a perigee of 278 km (173 mi), apogee of 460 km (286 mi), and inclination of 51.6°, allows the station to be reached by the launch vehicles of all the international partners for delivery of crews, components, and supplies. The orbit also enables observations to be made of 85% of the globe and over-flight of 95% of Earth's population.

In 1984 President Ronald Reagan committed the United States to developing a permanently-occupied space station and, along with NASA, invited other countries to join the project. Within little more than a year, nine of ESA's 13 member countries had signed on, as had Canada and Japan.

In 1991 President George Bush (senior) and Soviet Premier Mikhail Gorbachev agreed to joint Space Shuttle-Mir missions that would lay the groundwork for cooperative space station efforts. From 1993 to the present, NASA has had to contend with numerous cost overruns and tight federal space budgets, plus the tragic loss in 2003 of the Space Shuttle Columbia that have eroded the station's capabilities and delayed its completion. Nevertheless, by streamlining the program, simplifying the station's design, and negotiating barter and cost-sharing agreements with other nations, NASA and its international partners have made the ISS a reality.

On-orbit assembly of the station began on November 20, 1998, with the launch of the Russian-built Zarya control module, and is due for completion in 2010.

Although the United States, through NASA, leads the ISS project, 15 other countries are involved in building and operating various parts of the station – Russia, Canada, Japan, Brazil, and 11 member nations of ESA (Belgium, Denmark, France, Germany, Italy, The Netherlands, Norway, Spain, Sweden, Switzerland, and the United Kingdom.


ISS components (in order of assembly)


A 19,300-kg (42,250-lb), 12.6-m (41-ft) long, 4.1-m (13-ft) wide module, equipped with solar arrays and six nickel-cadmium batteries capable of generating an average of 3 kW of power, that provided early propulsion, power, fuel storage, and communication, and served as the rendezvous and docking port for Zvezda.

Zarya's construction was funded by NASA and undertaken in Moscow by Boeing and the Khrunichev State Research and Production Space Center. Following its launch, it was put through a series of tests before being commanded to fire its two large engines to climb to a circular orbit 386 km high. The module's engines and 36 steering jets had a six-ton reservoir of propellant to enable altitude and orientation changes. Its side docking ports are used by Russia's Soyuz piloted spacecraft and Progress remotely-controlled supply vehicles. As assembly progressed, Zarya's roles were assumed by other Station elements and it is now used primarily as a passageway, docking port and fuel storage site.

The Unity Node is a connecting passageway to living and work areas of the ISS. It was the first major US-built component of the station. Unity Node was delivered during STS-88 on Space Shuttle Endeavour in December 1998. The Pressurized Mating Adapter 1 was prefitted to its aft port. The crews conducted three space walks to attach Pressurized Mating Adapter 1 to the Zarya Control Module. This was the second International Space Station Assembly Flight and was designated 2A.

In addition to its connection to Zarya, Unity serves as a passageway to the U.S. Laboratory Module and an airlock. It has six hatches that serve as docking ports for the other modules.

The first fully Russian contribution to the ISS and the early cornerstone for human habitation of the station. The 19-ton, 13.1-m-long Zvezda, provided the first living quarters aboard the station, together with electrical power distribution, data processing, flight control, and propulsion systems. It also has a communications system enabling remote command from ground controllers. Although many of its systems will eventually be supplemented or superceded by American components, Zvezda will remain the structural and functional center of the Russian segment of the ISS.

An American-supplied framework that serves as the backbone of the ISS and the mounting platform for most of the station's solar arrays. The truss also supports a mobile transporter that can be positioned for robotic assembly and maintenance operations and is the site of the Canadian Mobile Servicing System, a 16.8-meter-long robot arm with 125-ton payload capability and mobile transporter which can be positioned along the truss for robotic assembly and maintenance operations.

America's main workstation for carrying out experiments aboard the ISS. The 16.7-m-long, 4.3-m-wide, 14.5-ton Destiny will support research in life sciences, microgravity, Earth resources, and space science. It consists of three cylindrical sections and two end-cones. Each end-cone contains a hatch through which crew members will enter and exit the lab. There are 24 racks inside the module, 13 dedicated to various experiments, including the Gravitational Biology Facility, and 11 used to supply power, cool water, and provide environmental control.

Effectively the ISS's moving van. Built by the Italian Space Agency it allows the Space Shuttle to ferry experiments, supplies, and cargo back and forth during missions to the station.


Prelude to ISS: the Shuttle-Mir program

Between 1995 and 1998, nine Space Shuttle-Mir docking missions were flown and American astronauts stayed aboard Mir for lengthy periods. Nine Russian cosmonauts rode on the Shuttle and seven American astronauts spent a total of 32 months aboard Mir, with 28 months of continuous occupancy starting in March 1996. By contrast, it took the Shuttle fleet more than a dozen years and 60 flights to accumulate one year in orbit. Valuable experience was gained in training international crews, running an international space program, and meeting the challenges of long-duration spaceflight for mixed-nation astronauts and ground controllers. Dealing with the real-time challenges of the Shuttle-Mir missions also fostered in a new level of cooperation and trust between those working on the American and Russian space programs.

Construction of the ISS began in late 1998 and was originally projected to involve a total of 45 assembly missions, including 36 by the Shuttle, and numerous re-supply missions by unmanned Progress craft and rotations of Soyuz crew-return vehicles.